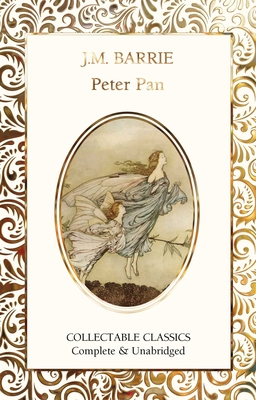 A stunning new edition with deluxe cover treatments, ribbon markers, luxury endpapers and gilded edges. The unabridged text is accompanied by a Glossary of Victorian and Literary terms produced for the modern reader. Includes Peter Pan in Kensington Gardens.

An iconic children’s classic, Peter Pan tells the story of the much-loved boy who never grew up. An instant success upon its publication in 1911, it follows Wendy Darling and her brothers, John and Michael, as they voyage to Neverland with Peter Pan, the tale’s titular protagonist. A tale of imagination and adventure ensues, as they encounter the Lost Boys, mermaids, pirates, fairies and more. A perennial favourite for all ages, it remains as captivating today as ever.

The FLAME TREE COLLECTABLE CLASSICS are chosen to create a delightful and timeless home library.

Best known today as creator of Peter Pan, writer and playwright Sir James Matthew Barrie (1860–1937) was born in Kirriemuir, Scotland. An avid reader and storyteller, Barrie knew from an early age that he wanted to be an author. His work, such as the play The Admirable Crichton (1901) was often a vehicle for social commentary.

Judith John is a writer and editor specializing in literature and history. A former secondary school English Language and Literature teacher, she has subsequently worked as an editor on major educational projects, including English A: Literature for the Pearson International Baccalaureate series. Judith’s major research interests include Romantic and Gothic literature, and Renaissance drama.
or
Not Currently Available for Direct Purchase
Copyright © 2020 American Booksellers Association