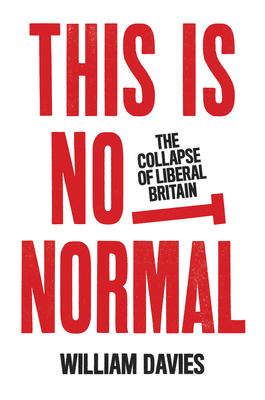 This is Not Normal

The Collapse of Liberal Britain

What just happened and how did we get into this mess?

Since the 2016 referendum, the UK has been in a crisis of its own making. But there are more reasons for this than Brexit alone. A wave of disruption has hit political parties, the mainstream media, public experts and all kinds of officials. Along the way, there have been dramatic and sometimes shocking events: the burning of Grenfell Tower and the Windrush scandal, the rise and fall of the Brexit Party, Boris Johnson’s Conservative purge and his resounding election victory. The state’s response to the pandemic was a further sign of how abnormal things had become.

As the ‘mainstream’ of politics and media has come under attack, the basic norms of public life have been thrown into question. Authoritarian and nationalist forces advance as liberalism recedes.

This Is Not Normal takes stock of a nation that no longer recognises itself. Davies finds the narrative sense behind apparently chaotic and irrational events, extracting their underlying logic and long-term causes. We are witnessing the combined effects of the 2008 financial crash, the failure of the British neoliberal project, the dying of Empire, and the impact of the changes that technology and communications have had on the public sphere. How the nation revives from the economic and political shocks of the lockdown remains uncertain. This is an essential book for anyone who wants to make sense of the current moment.

Praise For This is Not Normal: The Collapse of Liberal Britain…

“This book presses pause on the dazzling contingent brightness of the present, and allows the reflections of the evening to gather and turn towards a new day.”
—Manchester Review of Books

“Brilliant … Davies will be one of the experts to turn to guide us through the coming years.”
—Wired

“As William Davies brilliantly articulates in his most recent book, This is Not Normal: The Collapse of Liberal Britain, it’s hard to convincingly advocate for normality, or indeed for norms in general, if you’ve spent years openly trashing the very notion.”
—Dublin Review of Books

“This Is Not Normal: The Collapse of Liberal Britain seeks to pore over the deeper roots, expressions and manifestations of four interlocking crises in British politics, addressing some of the most pressing and perplexing questions facing the UK … as Davies so skillfully shows, it would be foolish to make any firm predictions of what happens next.”
—LSE Review of Books

“This Is Not Normal seeks to pore over the deeper roots, expressions and manifestations of four interlocking crises in British politics … as Davies so skillfully shows, it would be foolish to make any firm predictions of what happens next.”
—Brave New Europe

“But as an example of what its author calls ‘real-time sociology,’ the book harbors more ambition and more value than just a chronicle. Building on theoretical insights developed in his earlier work, Davies undertakes an applied investigation into the intertwined fates of liberalism, democracy, and media in the Anglo-American present, an investigation anchored in the problem of trust.”
—Adam Kelly, LA Review of Books

William Davies is Professor of Political Economy at Goldsmiths, University of London, where he is Co-Director of the Political Economy Research Centre [PERC]. He is the author of The Limits of Neoliberalism, The Happiness Industry and Nervous States. He writes regularly for the Guardian, London Review of Books and the New York Times.