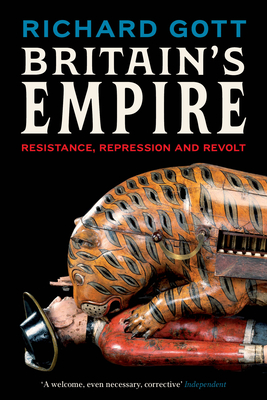 As the call for a new understanding of our national history grows louder, Britain’s Empire turns the received imperial story on its head. Richard Gott recounts the long-overlooked narrative of resisters, revolutionaries and revolters who stood up to the might of the Empire. In a story of almost continuous colonialist violence, Britain’s crimes unspool from the beginning of the eighteenth century to the Indian Mutiny, spanning the globe from Ireland to Australia. Capturing events from the perspective of the colonised, Gott unearths the all-but-forgotten stories excluded from mainstream histories.

“Gott’s … contribution is to restore—or in many cases to introduce—the British Empire’s rebels and resisters to the general picture; which of course bears out his view of its tyranny (otherwise why would they have resisted?), but also, and more importantly, elevates the subjects of the Empire to a higher and more dignified status that that of mere ‘victims.’ He is right to say that this ‘tale of resistance over two centuries has never before been considered over the wide sweep of Empire.’”
—Bernard Porter, Times Literary Supplement

“Vivid and startling … Gott’s achievement is to show, as no historian has done before, that violence was a central, constant and ubiquitous part of the making and keeping of the British Empire.”
—Richard Drayton, Guardian

“His message is stark but Gott is never shrill. He writes as a scholar, not an accuser.”
—Jonathan Steele, Red Pepper

“Pungent and provocative … a rich compendium of revolt.”
—Gavin Bowd, Scotland on Sunday

“A relentless chronicle of resistance to British rule and the brutality with which that resistance was suppressed.”
—Socialist Worker

“Throughout its history the British Empire was drenched in blood. Gott’s book makes an indispensable contribution towards establishing this truth.”
—John Newsinger, Socialist Review

“A salutary counterblast and a goodbye to all that Niall Ferguson and his ilk would like to establish as the official history to be taught in British schools.”
—Irish Left Review

“Gott does for the enslaved peoples of the Empire what E. P. Thompson did for the ordinary English working classes—he rediscovers their histories and gives them back their voices of resistance to British imperialism.”
—Andy Gregg, Chartist

“By putting resistance at the heart of the story of the British Empire, Richard Gott has perhaps made one of the clearest statements yet about the reality of British imperial rule.”
—Resolute Reader

“He provides, for the first time, a sense of the sheer extent of the injury suffered by the colonised people.”
—William Jackson, Reviews in History

“Anyone tending to view the British Empire as benign or civilising will get a jolt from this painstaking and detailed history … an excellent antidote to the voguish apologists for Empire currently influencing the school curriculum today.”
—Mike Phipps, Labour Briefing

“The importance of Gott’s book is its range—many instances of imperial brutality are catalogued with almost gleeful precision. It is also true that much of the tough, fighting side of empire has been glossed over in a series of saccharine, Boy’s Own accounts, which tend to romanticise the achievements of soldiers and generals. Gott provides a useful corrective … he should be admired for the enthusiasm, dedication and thoroughness with which he has set about his task.”
—Kwasi Kwateng, Literary Review

“At the heart of Gott’s argument … lies a fundamental truth: violence was implicit and a quotidian fact of empire. It is equally true that historians have not attended sufficiently to that fact.”
—Richard N. Price, H-Empire

“Remembering the forgotten and ignored stories of Empire—the victories as well as the failures of the conquered peoples, the atrocities of the conquerors—is one important step in building respect and beginning the long hard work of making amends for centuries of injustice. In this important task, Richard Gott’s latest book is a powerful resource.”
—Joshua Paetkau, Catholic Commons

“His originality lies in retrieving the names and reputations of rebels and resisters, looking at the empire from below … He demonstrates conclusively that the establishment and maintenance of the British empire was a source of constant struggle: in nearly all areas of the world, few accepted its arrival with equanimity.”
—John MacKenzie, BBC History Magazine

“An epic work of popular history examining the resistance to empire on the part of its victims.”
—Musab Yunus, Oxonian Review

“Britain’s Empire brings together and archives the history of diverse people who share a sad tradition: that of those who were oft en outgunned, scared, tired, broken and oppressed, and still fought. These were real people, and while many of their names will never be known, they are lent back moments of their lives and trials over 500 excellent pages.”
—Joe Glenton, Counterfire

“For many years a radical journalist, Gott is good on the detail … his great strength is the way he draws out the links and reverberations of events in the British Empire.”
—James Heartfield, Spiked-online

Richard Gott is a former Latin America correspondent and features editor for the Guardian. A specialist in Latin American affairs, his books include Cuba: A New History, Guerrilla Movements in Latin America, The Appeasers (with Martin Gilbert), Land Without Evil, Hugo Chávez and the Bolivarian Revolution, and Britain's Empire. He is currently an honorary research fellow at the institute for the study of the Americas at the University of London.
Loading...
or support indie stores by buying on