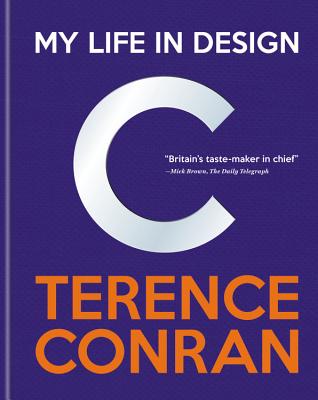 My Life in Design

Few individuals in the last century have had such a wide-reaching influence on the way we live our lives than Sir Terence Conran - from how we decorate our homes to our passion for eating out. Now in his eighties and still designing beautiful homeware and opening buzzy, welcoming restaurants, Sir Terence looks back at the Conran brand since he founded the Conran Design Studio sixty years ago and explores the many areas where he and his design team have made an impact.

Chapters cover the founding of Habitat, product design, furniture, catalogues and books, housing and hotels, retail and fashion and the creation of the Design Museum. Extensively illustrated with photographs and drawings and with a lively, incisive commentary that reveals the stories behind the designs, Terence Conran: My Life in Design will appeal to designers, students and all those who have grown up with the work of the multi-talented Sir Terence Conran.

Praise For Terence Conran: My Life in Design…

Sir Terence Conran was one of the world's best-known designers, retailers and restaurateurs. Born in 1931 he founded the Conran Design Studio in 1956, and in 1964 opened the first of the Habitat chain of home furnishing stores that revolutionized design on the British high street in the '60s and '70s and continued to expand its influence around the globe. Later Terence established The Conran Shop and opened stores in London, Paris, Germany, New York, across Japan as well as his largest store ever in Seoul, South Korea.

In the 1990s Terence founded Conran Restaurants, opening iconic restaurants, hotels and bars around the world including Quaglino's, Bluebird, Mezzo, Guastavino's and Le Pont de la Tour. His other restaurant ventures included the iconic Bibendum in Chelsea and The Boundary in Shoreditch.

In 1989 he founded the Design Museum in London, the world's first museum dedicated to design, which moved to larger premises in the former Commonwealth Building in Kensington, in 2016.

Terence wrote more than 50 informative books that reflect his philosophy - that good design improves the quality of people's lives.

Terence was knighted for his services to design in 1983, and in 2018 he was made a Companion of Honour by Her Majesty The Queen, one of the highest distinctions available in the United Kingdom.
Loading...
or
Not Currently Available for Direct Purchase