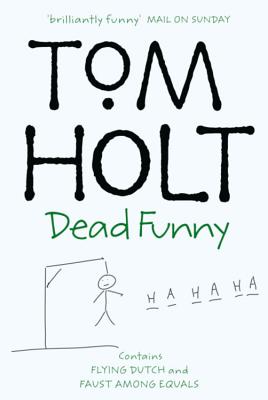 FLYING DUTCH - It's amazing the problems drinking can get you into. One little swig from the wrong bottle and you go from being an ordinary Dutch sea-captain to an unhappy immortal, drifting around the world with your similarly immortal crew. Little does Cornelius Vanderdecker, the Flying Dutchman, suspect that a chance encounter in an English pub might just lead to the end of his cursed life.

FAUST AMONG EQUALS - The management buy-out of Hell wasn't going quite as planned. For a start, there had been that nasty business with the perjurers, and then came the news that the Most Wanted Man in History had escaped. But Kurt 'Mad Dog' Lundqvist, the foremost bounty hunter of all time, is on the case, and he can usually be relied on to get his man - even when that man is Lucky George Faustus ...

Exuberant comedy from Tom Holt at his inventive best.

Frothy, fast and funny—SCOTLAND ON SUNDAY

Tom Holt is the author of such comic fantasy classics as: Expecting Someone Taller, Who's Afraid of Beowulf?, Flying Dutch, Ye Gods!, Overtime, Here Comes the Sun, Grailblazers, Faust Among Equals, Odds and Gods, Djinn Rummy, My Hero, Paint Your Dragon and Open Sesame
Loading...
or support indie stores by buying on