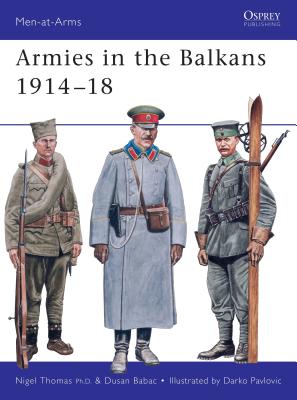 Recent history should remind us that it was events in the Balkans which sparked off World War I (1914-1918), with the assassination of the Austrian heir Prince Franz Ferdinand in Sarajevo, and the consequent invasion of Serbia by Austro-Hungarian armies on 2 August 1914. Nevertheless, the subsequent four-year war in that theatre is always overshadowed by the simultaneous campaigns on the Western Front. For the first time this book offers a concise account of these complex campaigns, the organisation, orders of battle, and the uniforms and insignia of the armies involved: Austro-Hungarian, German, Ottoman, Serbian, Montenegrin, Albanian, British, French, Italian, Russian, Bulgarian, Greek and Rumanian.

DR NIGEL THOMAS PhD is an accomplished linguist and military historian, formerly at Northumbria University, now a freelance military author, translator and military uniform consultant. His interests are 20th-century military and civil uniformed organizations, with a special interest in Germany, Central and Eastern Europe. He has written widely for Osprey with titles such as MAA 518 Polish Legions 1914–19 and Elite 227 Armies of the Baltic Independence Wars 1918–20.He was awarded a PhD for the study of the Eastern enlargement of NATO.

DUŠAN BABAC has an MSc in Hydrogeology from Belgrade University, Serbia; and is an associate of the Belgrade Military Museum and Serbian History Museum, and Director of the Royal Palace Foundation. Since 1995, he has published more than 20 books on military history and numerous articles, in Serbia, Slovenia, Russia, France, Germany, Italy and Japan. He has also acted as a consultant on many films and theatrical productions. With Nigel Thomas, he is the co-author of MAA 356, Armies in the Balkans 1914–18.
Loading...
or
Not Currently Available for Direct Purchase