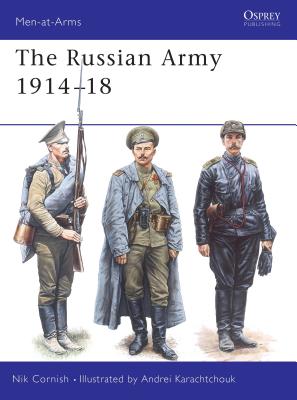 Often overshadowed by the drama of its catastrophic collapse in the November 1917 Revolution, the Imperial Russian Army's record in 1914-16 included some notable victories. Its human qualities of patriotism and endurance were remarkable, and in 1916 the 'Brusilov Offensive' on the South-Western Front outdistanced anything that was being achieved in France. The variety and romance of its uniforms - infantry and cavalry, Guards and Line, Cossacks, armour and Air Service crewmen, even a priest - are splendidly captured here by Russia's leading military artist; and Nik Cornish's expert text is supported by tables of insignia and many rare photographs.

NIK CORNISH was born in Cardiff in 1954, and currently lives and works in exile in the south of England. Formerly a teacher, he founded STAVKA Military Research, specialising in eastern European conflicts, at the end of the last century. This is his first book for the Osprey Military series.

"... a wealth of information essential to anyone interested in the RCW from Murmansk to the Ukraine and Crimea to Siberia and the Far East... What is most striking about [this book] is the evolution of the skill of the artist Andrei Karachtchouk... In The Russian Army, he has really outdone himself... an essential part of anyone's Russian Civil War library." -HMG Reviewing Stand