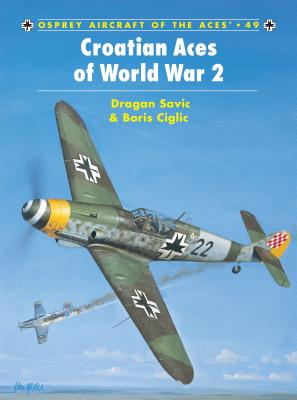 Croatian Aces of World War 2 (Aircraft of the Aces) (Paperback)

Initially flying Italian-supplied Fiat G.50s, the Croat forces suffered heavy losses during 1942 whilst flying alongside JG 52 in the southern sector of the Russian front. Despite this, a significant number of kills fell to future aces such as Cvitan Galic and Mato Dubovak during this time, and when the units re-equipped with Bf 109G-10s in 1943, battle-seasoned Croat pilots started to rack up impressive scores. This book reveals how, by 1944, Croat air groups were defending Yugoslavia from British and American air raids, and in the final months of the war a handful of surviving pilots fought on until final defeat in May 1945.

Boris Ciglic is a member of the Yugoslav Historical Research Group attached to the Yugolsav Air Force Museum in Belgrade. He has spent many years detailing the history of the Croatian Air Groups, and has unearthed some terrific material. Dragan Slavic has been an associate of the Yugoslav Aeronautical Museum since 1978 and has established himself as one of the leading experts on the Croatian Air Force. In addition to more than sixty articles published in numerous Yugoslav aviation magazines, he has also assisted prominent aviation historians, contributing to books such as 'Horrido', 'Aeronautica Italiana nella Seconda Guerra Mondiale' and 'April 1941'. This is his first book for Osprey.
or
Not Currently Available for Direct Purchase
Copyright © 2020 American Booksellers Association