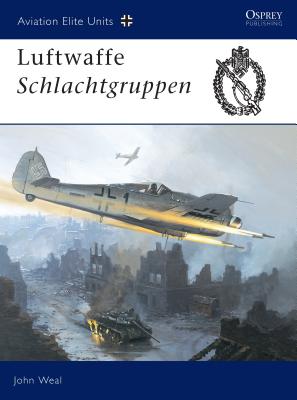 One of the most important, and yet least publicised, components of the front-line Luftwaffe was the Schlacht, or ground attack, arm. This book details the Schlacht units who were in the thick of the fighting from the first day of the war until the last. They played a vital part in the heady successes of the early Blitzkrieg campaigns and went on to perform an equally essential role in the dark hours of last ditch defence and ultimate defeat. In between, they fought in all defensive battles: on the eastern front at Stalingrad, Kursk and Berlin; in the west, by night, over Normandy, the Ardennes and the Rhine.

The color plate section of the book has profiles of the following, disperate aircraft:

All of which were flown by this squadron. Also of note is the fact that this Ace pilot Hans-Ulrich Rudel was part of this distinguished unit.

Arguably the finest profile artist in the business, John Weal's love of German aircraft makes his work a treat for students of the subject. He has written several Aircraft of the Aces volumes, and two books on the JU 87 in the companion series, Combat Aircraft.
or
Not Currently Available for Direct Purchase
Copyright © 2020 American Booksellers Association