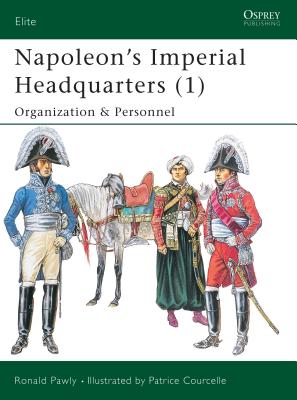 Osprey's detailed study of the entourage which enabled Napoleon to move hundreds of thousands of troops right across Europe during the Napoleonic Wars (1799-1815). The 'military machine' by which Napoleon and his indispensable chief of staff Marshal Berthier commanded and controlled his huge armies on campaign numbered some 1,500 officers and men, organized in the different bureaux of his military and civilian 'households' and the army general headquarters. This essential tool of the Emperor's power was designed to provide him, even in a front-line camp, with all the information, technical support and comfort that he enjoyed in his palaces.

Ronald Pawly was born in Antwerp, Belgium, in 1956. His forté is research in the field of military portraiture. In 1998 he published his first major work, 'The Red Lancers'. Ronald has written several books for Osprey, including Men-at-Arms 355: 'Wellington's Belgian Allies 1815', 378: 'Napoleon's Guards of Honour' and 389: 'Napoleon's Red Lancers'.
Loading...
or
Not Currently Available for Direct Purchase