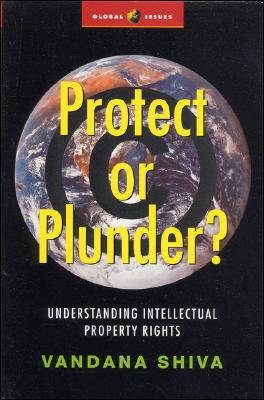 Intellectual property rights, TRIPS, patents - they sound technical, even boring. Yet, as Vandana Shiva shows, what kinds of ideas, technologies, identification of genes, even manipulations of life forms can be owned and exploited for profit by giant corporations is a vital issue for our times. In this readable and compelling introduction to an issue that lies at the heart of the socalled knowledge economy, Vandana Shiva makes clear how this Western-inspired and unprecedented widening of the concept does not in fact stimulate human creativity and the generation of knowledge. Instead, it is being exploited by transnational corporations in order to increase their profits at the expense of the health of ordinary people, and the poor in particular, and the age-old knowledge and independence of the world's farmers. Intellectual protection is being transformed into corporate plunder. Little wonder popular resistance around the world is rising to the WTO that polices this new intellectual world order, the pharmaceutical, biotech and other corporations which dominate it, and the new technologies they are foisting upon us.

“One of the world's most prominent radical scientists.” —The Guardian (UK)

“Shiva has devoted her life to fighting for the rights of ordinary people in India. Her fierce intellect and her disarmingly friendly, accessible manner have made her a valuable advocate for people all over the developing world.” —Ms. Magazine

Vandana Shiva was one of India's leading physicists and is now a leading environmental campaigner, the winner of the Alternative Nobel Peace Prize and the author of several books, including Soil not Oil (2008), Earth Democracy (2005) and Stolen Harvest (2001).
Loading...
or support indie stores by buying on