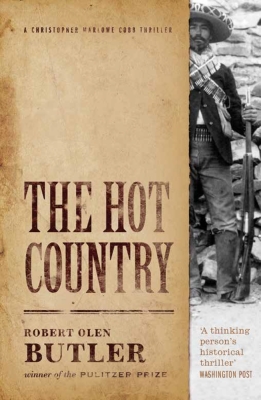 The Hot Country is an epic tale of war, love, and espionage. Christopher Marlowe Cobb is an American newspaper war correspondent who travels to Mexico in 1914 to report on the country's civil war, the invasion of Vera Cruz, and the controversial presidency of Victoriano Huerta, El Chacal (The Jackal). Covering the war in enemy territory and sweltering heat, Cobb falls in love with Luisa, a beautiful Mexican laundress, who is not as innocent as she seems.
Upon investigating a German ammunition ship docked in the marina, Cobb finds himself fired upon by unknown assailants, then witnesses a priest being shot with marksman-like precision. Cobb employs a young pickpocket to help him find out the identity of the sniper and, more importantly, why important German officials are coming into the city in the middle of the night from that very ship docked in the port. Soon Cobb finds himself wrapped up in a web of secrets that could change the the fate of the fate of myriad world leaders, redefine the destiny of two continents, and end his life at any moment. An action-packed chronicle of passion and war, Butler's powerful crime-fiction debut is a thriller not to be missed.

Robert Olen Butler is the Pulitzer Prize-winning author of fourteen novels, six story collections, and a book on the creative process, From Where You Dream. A recipient of both a Guggenheim Fellowship in fiction and a National Endowment for the Arts grant, he also won the Richard and Hinda Rosenthal Foundation Award from the American Academy of Arts and Letters and was a finalist for the PEN/Faulkner Award. He has twice won a National Magazine Award in Fiction and has received two Pushcart Prizes. He teaches creative writing at Florida State University.
Loading...
or
Not Currently Available for Direct Purchase