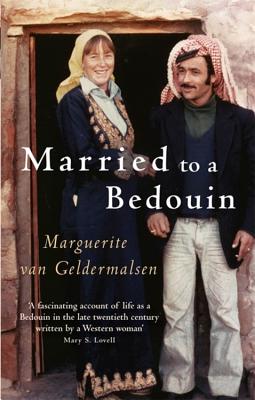 Married to a Bedouin

'"Where you staying?" the Bedouin asked. "Why you not stay with me tonight - in my cave?"'

Thus begins Marguerite van Geldermalsen's story of how a New Zealand-born nurse came to be married to Mohammad Abdallah Othman, a Bedouin souvenir-seller from the ancient city of Petra in Jordan. It was 1978 and she and a friend were travelling through the Middle East when Marguerite met the charismatic Mohammad who convinced her that he was the man for her.

A life with Mohammad meant moving into his ancient cave and learning to love the regular tasks of baking shrak bread on an open fire and collecting water from the spring. And as Marguerite feels herself becoming part of the Bedouin community, she is thankful for the twist in fate that has led her to this contented life.

Marguerite's light-hearted and guileless observations of the people she comes to love are as heart-warming as they are valuable, charting Bedouin traditions now lost to the modern world.


Praise For Married to a Bedouin…

For anyone who enjoys travel books, especially about the Middle East, this is the real thing - a fascinating account of life as a Bedouin in the late twentieth century written by a Western woman—Mary S. Lovell

In a world troubled by Arab extremism, this sparkling memoir is a refreshing antidote and a rare window into the legendary hospitality and mysterious customs of the Bedouin Arabs—Publishing News

In a world troubled by Arab extremism, this sparkling memoir is a refreshing antidote and a rare window into the legendary hospitality and mysterious customs of the Bedouin Arabs' Publishing News

Marguerite is from New Zealand. In 1978 she met Mohammad Abdallah in Petra, Jordan, married him and moved into his Nabataean cave. In 1985 they moved to the new Bedouin settlement, Umm Sayhoon. She was widowed in 2002. She has three children.
Loading...
or
Not Currently Available for Direct Purchase