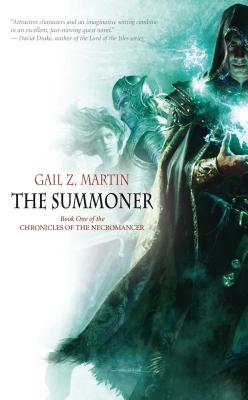 Book One in the Chronicles of the Necromancer

The comfortable world of Martris Drayke, second son of King Bricen of Margolan, is shattered when his older half-brother, Jared, and Jared¿s dark mage, Foor Arontala, kill the king and seize the throne. Tris is the only surviving member of the royal family aside from Jared the traitor. Tris flees with three friends: Soterius, captain of the guard; Carroway, the court¿s master bard; and Harrtuck, a member of the royal guard. Tris harbors a deep secret. In a land where spirits walk openly and influence the affairs of the living, he suspects he may be the mage heir to the power of his grandmother, Bava K¿aa, once the greatest sorceress of her age. Such magic would make Tris a Summoner, the rarest of magic gifts, capable of arbitrating between the living and the dead.

Gail Martin has worked with non-profit and for-profit organizations in many industries. She is an adjunct professor for UNC Charlotte and a part-time instructor for Central Piedmont Community College who teaches public speaking, continuing education (marketing topics) and public relations writing. She is an award winning writer with articles and stories published throughout the US.
Loading...
or
Not Currently Available for Direct Purchase