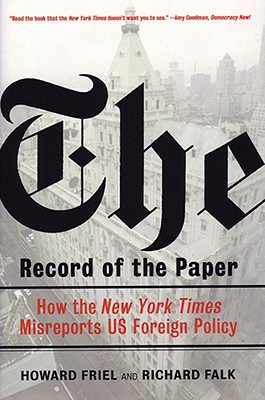 The Record of the Paper

How the New York Times Misreports US Foreign Policy

When the New York Times finally apologized for its coverage of Iraq’s weapons of mass destruction in 2004, it was too late. The newspaper had already supported the invasion. The Bush administration was not only violating international law, it was lying to the public, using major media like the Times to spread its message.

In this meticulously researched study—the first part of a two-volume work—Howard Friel and Richard Falk demonstrate how the newspaper of record in the United States has consistently, over the last 50 years, misreported the facts related to the wars waged by the United States. From Vietnam in the 1960s to Nicaragua in the 1980s and Iraq today, the authors accuse the New York Times of serial distortions. They claim that such coverage now threatens not only world legal order but constitutional democracy in the United States.

Falk and Friel show, for example, that, despite numerous US threats to invade Iraq, and despite the fact that an invasion of one country by another implicates fundamental aspects of the UN Charter and international law, the New York Times editorial page never mentioned the words “UN Charter” or “international law” in any of its 70 editorials on Iraq from September 11, 2001, to March 20, 2003. The authors also show that the editorial page supported the Bush administration’s WMD claims against Iraq, and that its magazine, op-ed and news pages performed just as poorly.

In conclusion the authors suggest an alternative editorial policy of “strict scrutiny” that incorporates the UN Charter and the US Constitution in the Times coverage of the use and threat of force by the United States and the protection of civil and human rights at home and abroad.


Praise For The Record of the Paper: How the New York Times Misreports US Foreign Policy…

“Friel and Falk provide a thorough and convincing analysis of how the New York Times advocated for the Iraq invasion, avoided dissenting views, ignored global opinion and established fact, and dismissed the relevance of international law. Perhaps most importantly, this book frames the shameful coverage of Iraq within the culture of the New York Times, with its consistent endorsement of US foreign policy from Vietnam to Nicaragua, Venezuela to Iraq. Read this book and join the fight for an independent media.”—Amy Goodman

“There could hardly be a more critical issue today than weather the world will be governed by the rule of law or the unilateral resort to force. This closely argued and penetrating study reviews half a century of increasing contempt for law and preference for force from a dualistic perspective: US government policy, and ‘journalistic malfeasance with far-reaching implications for constitutionalism in the United States and the rule of law for our country and the world’—no exaggeration, as the authors demonstrate in meticulous detail. The Record of the Paper should be read and pondered carefully, and taken as a call for action by concerned citizens.”—Noam Chomsky

Richard Falk was Professor of International Law Emeritus at Princeton University and since 2002 is Visiting Professor of Global Studies at the University of California, Santa Barbara.
Loading...
or
Not Currently Available for Direct Purchase