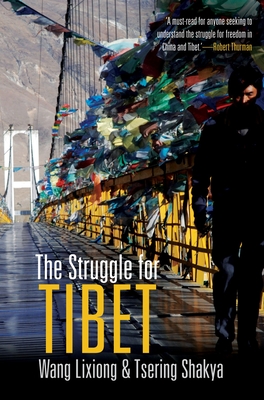 The Struggle for Tibet

China’s decades-long repression of Tibetan independence continues on as its global economic power continues to grow. In response to the former and despite the latter, the independence movement persists, represented here through the voices of Wang Lixiong and Tsering Shakya. Born into the repressive one-party regime, both writers now seek for Tibetan cultural and political autonomy, and although each writer theorizes this goal differently, both are in agreement about what must now be done. The result is this milestone exchange.

While Wang suggests the complicity of a fear-stricken religion in perpetuating Chinese imperialist rule, Shakya interprets recent Tibetan history as a history of colonialism, against which the independence movement struggles for autonomous rule. These differing and sometimes opposing lines of thought finally climax in the present struggle for independence, ending upon a joint statement regarding Tibet’s future: true autonomy is the only way.

Praise For The Struggle for Tibet…

“A must-read for anyone seeking to understand the struggle for freedom in China and Tibet.”—Robert Thurman

Wang Lixiong’s books include China Tidal Wave, Sky Burial: The Fate of Tibet, and Yellow Peril, the political fantasy that has gained widespread popularity in China despite having been banned by the communist regime. He lives in Beijing with his wife, the well-known Tibetan writer, dissident and poet Woeser. In response to a 2008 letter (co-authored with Tsering Woeser and several Chinese authors in and outside China) asking Chinese authorities to consider implementing the Dalai Lama’s “Middle Way” approach as the basis of a negotiated statute for the future of Tibet, Wang and Woeser were placed under house arrest by the Chinese authorities.

Tsering Shakya was born in Tibet and teaches Tibetan history and literature at the University of British Columbia, Canada. He holds the Canadian Research Chair in Religion and Contemporary Society in Asia at the University of British Columbia’s Institute for Asian Research and is the author of The Dragon in the Land of Snows: A History of Modern Tibet Since 1947, and Fire Under the Snow: The Testimony of a Tibetan Prisoner. Tsering Shakya provides critical assessments of immigration and asylum procedures as well as compliance with various international civil/human rights laws for the Swiss Government’s Federal Office for Refugees. He also works off-air for Radio Free Asia’s (RFA) Tibet news service and on-air, every fortnight, presenting an international current affairs ‘slot’ on RFA. He also makes regular appearances on the BBC and CNN and frequently writes feature articles for Time magazine.
Loading...
or
Not Currently Available for Direct Purchase