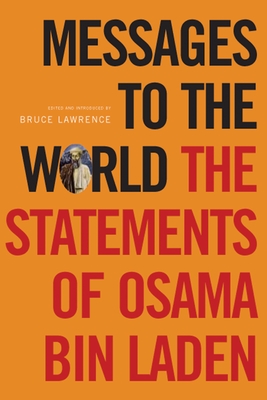 Messages to the World

The Statements of Osama Bin Laden

Despite the saturation of global media coverage, Osama bin Laden’s own writings have been curiously absent from analysis of the “war on terror.” Over the last ten years, bin Laden has issued a series of carefully tailored public statements, from interviews with Western and Arabic journalists to faxes and video recordings. These texts supply evidence crucial to an understanding of the bizarre mix of Quranic scholarship, CIA training, punctual interventions in Gulf politics and messianic anti-imperialism that has formed the programmatic core of Al Qaeda.

In bringing together the various statements issued under bin Laden’s name since 1994, this volume forms part of a growing discourse that seeks to demythologize the terrorist network. Newly translated from the Arabic, annotated with a critical introduction by Islamic scholar Bruce Lawrence, this collection places the statements in their religious, historical and political context. It shows how bin Laden’s views draw on and differ from other strands of radical Islamic thought; it also demonstrates how his arguments vary in degrees of consistency, and how his evasions concerning the true nature and extent of his own group, and over his own role in terrorist attacks, have contributed to the perpetuation of his personal mythology.

Praise For Messages to the World: The Statements of Osama Bin Laden…

“A magnificent piece of eloquent, at times even poetic Arabic prose ... in devising strategies to fight the terrorists, it would be useful to understand the forces that drive them.”—Bernard Lewis, Foreign Affairs

“Western media have made no consistent effort to publish bin Laden’s statements, thereby failing to give their audience the words that put his thoughts and actions in cultural and historical context ... Bin Laden has been precise in telling America the reasons he is waging war on us. None of the reasons have anything to do with our freedom, liberty and democracy, but have everything to do with US policies and actions in the Muslim world.”—Michael Scheuer

“Despite the religious rhetoric and the bloody means, bin Laden is a rational man. There is a simple reason why he attacked the US: American imperialism. As long as America seeks to control the Middle East, he and people like him will be its enemy.”—Michael Mann

“This vital collection of Bin Laden’s statements ... provides an invaluable insight into his thinking by bringing his disparate pronouncements within a single set of covers.”—Malise Ruthven, Sunday Times

“Collectively, these messages are the closest we will ever have to the terrorist leader’s Mein Kampf.”—Mary Braid, Independent on Sunday

“The first complete collection of the Saudi’s statements published today portrays a world in which Islam’s enemies will take the first steps towards salvation by embracing the ‘religion of all the Prophets.’”—Daily Telegraph

Osama bin Laden is a member of the prominent Saudi bin Laden family and the founding leader of the terrorist organization al-Qaeda.

Bruce Lawrence is the Nancy and Jeffrey Marcus Humanities Professor of Religion at Duke University. He is the author of New Faiths, Old Fears: Muslims and Other Asian Immigrants in American Religious Life, Shattering the Myth, and Defenders of God: The Fundamentalist Revolt Against the Modern Age.
Loading...
or
Not Currently Available for Direct Purchase