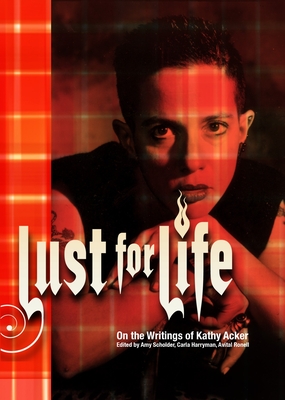 On the Writings of Kathy Acker

Kathy Acker was one of the most original, subversive and influential writers of the late 20th century. Known variously, and notoriously, as a consummate postmodernist, feminist, post-punk and plagiarist, her oeuvreover a dozen novels and novellashas inspired a generation of writers and artists.

Lust for Life is the definitive collection of essays on Acker’s inimitable work, including Peter Wollen’s elegiac primer, widely considered the best introduction to Acker, and Avital Ronell’s erudite meditation on friendship and mourning. Together these essays by scholars and writers reveal Acker’s profound and innovative project, and the ways in which fiction can penetrate the heart of political and cultural life.

Praise For Lust For Life: On the Writings of Kathy Acker…

“Acker may be the true mother of Brat Pack writers like Brett Easton Ellis, but there isn’t disgust in her work ... Transgression is never disgust—it is a way of surviving.”—Jeanette Winterson

“From the fringes, an outsider, Kathy Acker penetrated the heart of American culture with a superb and wicked intellectual force we had not seen before.”—Sapphire

“Scarified sensibility, subversive intellect, and predatory wit make her a writer like no other I know.”—New York Times Book Review

Carla Harryman is the author of several books including Baby, Gardener of Stars and There Never Was a Rose Without a Thorn.

Avital Ronell teaches at New York University, The European Graduate School and Paris VIII, and is the author of many books including The Test Drive.

Amy Scholder is the Editorial Director of the Feminist Press.

Peter Wollen was Chair of the Department of Film, Television and New Media at the University of California, Los Angeles. His other books include Paris/Hollywood: Writings on Film and Paris/Manhattan: Writings on Art.
Loading...
or
Not Currently Available for Direct Purchase