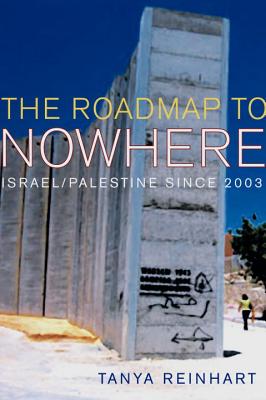 The Road Map to Nowhere

The Road Map to Nowhere is a devastating and timely book, essential to understanding the current state of the Israel/Palestine crisis and the propaganda that infects its coverage. Based on analysis of information in the mainstream Israeli media, it argues that the current road map has brought no real progress and that, under cover of diplomatic successes, Israel is using the road map to strengthen its grip on the remaining occupied territories. Exploring the Gaza pullout of 2005, the West Bank wall and the collapse of Israeli democracy, Reinhart examines the gap between myth the Israeli leadership’s public affairs achievement that has led the West to believe that a road map is in fact being implementedand bitter reality. Not only has nothing fundamentally changed, she argues, but the Palestinians continue to lose more of their land and are pushed into smaller and smaller enclaves, surrounded by the new wall constructed by Sharon.

Praise For The Road Map to Nowhere: Israel/Palestine Since 2003…

“Tanya Reinhart’s informative and chilling analysis could hardly be more timely. It should be read and considered with care, and taken very seriously.”—Noam Chomsky

Tanya Reinhart was Professor Emeritus of linguistics and media studies at Tel Aviv University, a Global Distinguished Professor at New York University, and a guest lecturer at the University of Utrecht. She had a regular column in the largest Israeli daily, Yediot Aharonot, contributed regularly to Counterpunch and Zmag and was the author of Israel/Palestine: How to End the War of 1948, and The Roadmap to Nowhere. She died in 2007.
Loading...
or
Not Currently Available for Direct Purchase