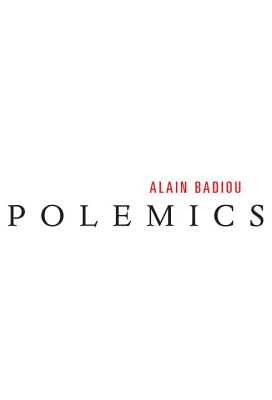 Following on from Alain Badiou’s acclaimed works Ethics and Metapolitics, Polemics is a series of brilliant metapolitical reflections, demolishing established opinion and dominant propaganda, and reorienting our understanding of events from the Kosovo and Iraq wars to the Paris Commune and the Cultural Revolution.

With the critical insight and polemical bravura for which he is renowned, Badiou considers the relationships between language, judgment and propaganda—and shows how propaganda has become the dominant force. Both wittily and profoundly, Badiou presents a series of radical philosophical engagements with politics, and questions what constitutes political truth.

“Scarcely any other moral thinker of our day is as politically clear-sighted and courageously polemical, so prepared to put notions of truth and universality back on the agenda.”—Terry Eagleton

Peter Hallward teaches at the Centre for Research in Modern European Philosophy at Kingston University, London. He is the author of several books including Absolutely Postcolonial, Badiou: A Subject to Truth, Out of This World: Deleuze and the Philosophy of Creation, and Damming the Flood.
Loading...
or
Not Currently Available for Direct Purchase