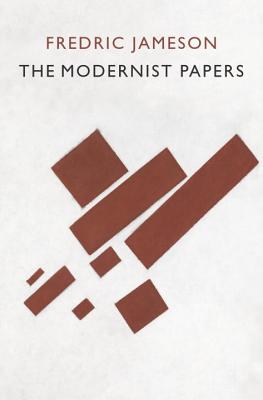 Cultural critic Fredric Jameson, renowned for his incisive studies of the passage of modernism to postmodernism, returns to the movement that dramatically broke with all tradition in search of progress for the first time since his acclaimed A Singular Modernity .

The Modernist Papers is a tour de froce of anlysis and criticism, in which Jameson brings his dynamic and acute thought to bear on the modernist literature of the nineteenth and twentieth centuries. Jameson discusses modernist poetics, including intensive discussions of the work of Baudelaire, Rimbaud, Mallarmé, Wallace Stevens, Joyce, Proust, and Thomas Mann. He explores the peculiarties of the American literary field, taking in William Carlos Williams and the American epic, and examines the language theories of Gertrude Stein. Refusing to see modernism as simply a Western phenomenon he also pays close attention to its Japanese expression; while the complexities of a late modernist representation of twentieth-century politics are articulated in a concluding section on Peter Weiss&rsquo;s novel The Aesthetics of Resistance.

Challenging our previous understanding of the literature of this pperiod, this monumental work will come to be regarded as the classic study of modernism.

Praise For The Modernist Papers…

&ldquo;Probably the most important cultural critic writing in English today ... It can truly be said that nothing cultural is alien to him.&rdquo;—Colin MacCabe

Fredric Jameson is Distinguished Professor of Comparative Literature at Duke University. The author of numerous books, he has over the last three decades developed a richly nuanced vision of Western culture&rsquo;s relation to political economy. He was a recipient of the 2008 Holberg International Memorial Prize. He is the author of many books, including Postmodernism, Or, The Cultural Logic of Late Capitalism, The Cultural Turn, A Singular Modernity, The Modernist Papers, Archaeologies of the Future, Brecht and Method, Ideologies of Theory, Valences of the Dialectic, The Hegel Variations and Representing Capital.
Loading...
or
Not Currently Available for Direct Purchase