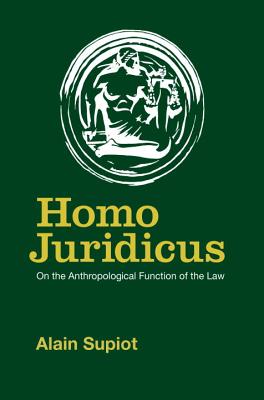 On the Anthropological Function of the Law

He argues that the law is how justice is implmented in secular society, but it is not simply a technique to be manipulated at will: it is also an expression of the core beliefs of the West. We must recognize its universalizing, dogmatic nature and become receptive to other interpretations from non-Western cultures to help us avoid the clash of civilizations.

In Homo Juridicus, Supiot deconstructs the illusion of a world that has become "flat" and undifferentiated, regulated only by supposed “laws” of science and the economy, and peopled by contract-makers driven only by the calculation of their individual interests. Such a liberal perspective is nothing but the flipside of the notion of the withering away of law and the state, promoted this time not under the banner of the struggle between classes, but rather in the name of the free competition between sovereign individuals.

Supiot’s exploration of the development of the legal subject–the individual as formed through a dense web of contracts and laws–is set to become a classic work of social theory.

Praise For Homo Juridicus: On the Anthropological Function of the Law…

“France’s most incisive jurist, Alain Supiot … has renewed the idea that all significant belief-systems require a dogmatic foundation by focusing its beam sharply, to the discomfort of their devotees, on the two most cherished creeds of our time: the cults of the free markets and of human rights.”
—Perry Anderson, London Review of Books

“The book addresses some contemporary issues with great erudition, and, as such, can profitably be read by anyone interested in the legal direction of advanced capitalism.”
—Robert Knox, Historical Materialism

“If Supiot’s corrective is a shade utopian, his diagnosis that something is amiss with contemporary trends in law and jurisprudence is an apposite and welcome contribution to a dissenting tradition.”
—Tor Krever, New Left Review

“Alain Supiot develops an original and ambitious approach of the place and role of the law for man with the curiosity and audacity of an anthropologist, but all the while avoiding the trap of universalism … The use of an anthropological wide-focus lens furnishes him with a wealth of observations which ground a high-calibre reflection, rigorously documented with examples drawn from the legal domain.”
—Études

“After centuries of triumphalism on behalf of homo economicus, one had given up hope of hearing one day about homo juridicus. We can only congratulate Alain Supiot for this work which defends the anthropological function of the law, reminding us that the human being is a metaphysical animal which exists not only in thew universe of things (the economic) but also in a universe of signs.”
—Revue trimestrielle de droit civil

Alain Supiot is a permanent fellow at the University of Nantes, France and Director of the Nantes Institute for Advanced Studies. His previous books include Beyond Employment: Changes in Work, The Future of Labour Law in Europe and, from Verso, Homo Juridicus.
Loading...
or
Not Currently Available for Direct Purchase