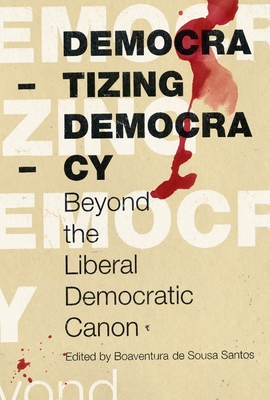 The majorconflicts between the Global North and the South can be expected toresult from the confrontation of alternative conceptions of democracy,mainly between liberal or representative democracy and participatorydemocracy.

The hegemonic model of democracy, while prevailing on aglobal scale, guarantees no more than low-intensity democracy. Inrecent times, participatory democracy has exhibited a new dynamic,engaging mainly subaltern communities and social groups that fightagainst social exclusion and the suppression of citizenship.

In thiscollection of reports from the Global South—India, South Africa,Mozambique, Colombia, and Brazil—De Sousa Santos and his colleaguesshow how, in some cases, the deepening of democracy results from thedevelopment of dual forms of participatory and representativedemocracy, and points to the emergence of transnational networks ofparticipatory democracy initiatives. Such networks pave one of the waysto the reinvention of social emancipation.

This is volume 1 of the Reinventing Social Emancipation project, edited by Boaventura de Sousa Santos.

“At last, someone is putting concrete analysis on ‘counter-hegemonic globalization from the bottom up.’ Boaventura de Sousa Santos has assembled social scientists from Latin America, Africa, and Asia to describe another kind of democracy, full of lessons for the benighted countries of the North, where it should be mandatory reading for serious people.”—Immanuel Wallerstein

“In the 1980s Margaret Thatcher declared ‘There is no alternative.’ At the beginning of the 21st century the World Social Forum replied, ‘Another World is Possible.’ The project, Reinventing Social Emancipation, is a passionate and wide-ranging effort enriching our vision of that other world.”—Erik Olin Wright

Boaventura de Sousa Santos is Professor of Sociology at the University of Coimbra (Portugal) and ILS Distinguished Scholar at the University of Wisconsin-Madison. He has been an active participant in the World Social Forum. His books include Toward a New Legal Common Sense: Law, Globalization and Emancipation.

Emir Sader is Emeritus Professor of Political Science at the University of São Paolo and Director of the Latin American Social Science Research Council (CLACSO).
Loading...
or support indie stores by buying on
(This book is on backorder)