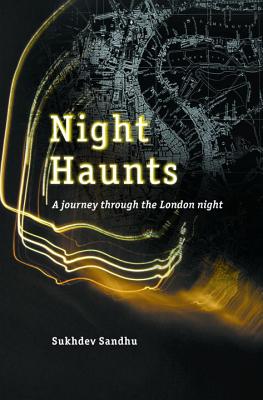 A Journey Through the London Night

London at night has always been seen as a lawless orgy of depravity and pestilence. But is it now as bland and unthreatening as any new town? Sukhdev Sandhu journeys across the city to find out whether the London night really has been rendered neutral by street lighting and CCTV cameras. His nocturnal forays see him prospecting in the London night with the people who drive its pulse, from the avian police to security guards, urban fox hunters and exorcists. He wades through the sewers, hangs out with pirate DJs, and accompanies the marine patrol looking for midnight corpses. Beautifully written, Night Haunts seeks to reclaim the mystery and romance of the city—to revitalize the great myth of London for a new century.


Praise For Night Haunts: A Journey Through the London Night…

“Some of the most ambitious and memorable work of the last decade.”—Time Out

“Artangel is truly on the side of the angels.”—Independent

Sukhdev Sandhu is the author of, among other books, "London Calling: How Black and Asian Writers Imagined a City," "I'll Get My Coat," and "Night Haunt"s. He lives in New york and London, and writes for the "London Review of Books," "Modern Painters" and the "TLS." He is the award-winning chief film critic of the "Daily Telegraph" and Associate Professor of English literature at New York University.
Loading...
or
Not Currently Available for Direct Purchase