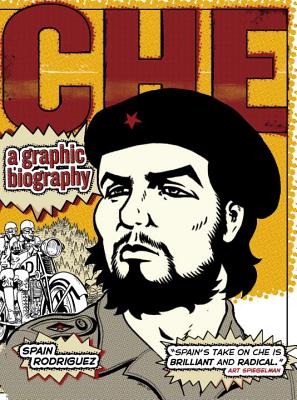 Since his death in 1967, Ernesto &ldquo;Che&rdquo; Guevara has become a universally known revolutionary icon and political figure whose image is among the most recognizable in the world. This dramatic and extensively researched book breathes new life into his story, portraying his struggle through the medium of the underground political comic—one of the most prominent countercultural art forms since the 1960s. Spain Rodriguez&rsquo;s powerful artwork illuminates Che&rsquo;s life and the experiences that shaped him, from his motorcycle journey through Latin America, his rise to prominence as a leader in Fidel Castro&rsquo;s revolutionary movement, his travels in Africa, his involvement in the insurgency that led to his death in Bolivia, and his extraordinary legacy.

Spain Rodriguez is one of the most well-known artists in the comix underground. He (along with Robert Crumb) was one of the original members of Zap Comics and has a reputation as an outstanding political artist. He is the author of several other graphic novels, including the highly acclaimed Nightmare Alley. His work is prominently featured in BLAB!, an annual comic anthology that has also featured Charles Burns, Mark Mothersbaugh, Daniel Clowes, and Chris Ware.

Paul Buhle,formerly a senior lecturer at Brown University, produces radical comics. He founded the SDS Journal Radical America and the archive Oral History of the American Left and, with Mari Jo Buhle, is coeditor of the Encyclopedia of the American Left. He lives in Madison.

Praise For Che: A Graphic Biography…

&ldquo;Spain is one of the true giants of the comics medium. He is a singular artist; his work is unmistakable.&rdquo;—Joe Sacco

&ldquo;Spain&rsquo;s take on Che is brilliant and radical.&rdquo;—Art Spiegelman
or
Not Currently Available for Direct Purchase
Copyright © 2020 American Booksellers Association