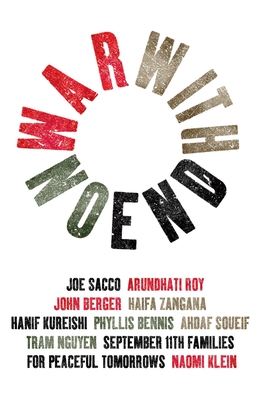 War With No End

On October 7th 2001, US-led forces invaded Afghanistan, marking the start of George Bush and Tony Blair’s “War on Terror.” Six years on, where have the policies of Bush and Blair left us? Bringing together some of the finest contemporary writers, this wide-ranging anthology, from reportage and “faction” to fiction, explores the impact of this “long war” throughout the world, from Palestine to Iraq, Abu Ghraib, the curtailment of civil liberties and manipulation of public opinion.

Published in conjunction with Stop the War coalition and United for Peace and Justice, War With No End provides an urgent, necessary reflection on the causes and consequences of the ideological War on Terror.

Storyteller, novelist, essayist, screenwriter, dramatist and critic, John Berger is one of the most internationally influential writers of the last fifty years. His many books include Ways of Seeing, the fiction trilogy Into Their Labours, Here Is Where We Meet, the Booker Prize-winning novel G, Hold Everything Dear, the Man Booker–longlisted From A to X, and A Seventh Man.

Joe Sacco lives in Portland, Oregon. He is the author of many acclaimed graphic novels, including Palestine, Safe Area Gorazde, But I Like It, Notes from a Defeatist, The Fixer, War’s End, and Footnotes in Gaza.

Lindsey German is a socialist writer and activist who has lived in London all her life. She is convenor of the Stop the War Coalition, stood as candidate for Mayor of London and has written books on women’s liberation, class, and war.
Loading...
or support indie stores by buying on