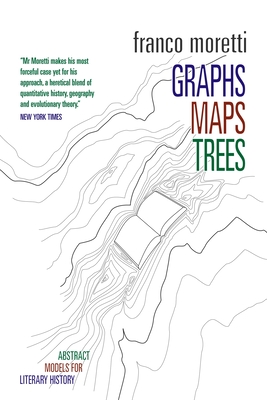 In this groundbreaking book, Franco Moretti argues that literature scholars should stop reading books and start counting, graphing, and mapping them instead. In place of the traditionally selective literary canon of a few hundred texts, Moretti offers charts, maps and time lines, developing the idea of “distant reading” into a full-blown experiment in literary historiography, in which the canon disappears into the larger literary system. Charting entire genres—the epistolary, the gothic, and the historical novel—as well as the literary output of countries such as Japan, Italy, Spain, and Nigeria, he shows how literary history looks significantly different from what is commonly supposed and how the concept of aesthetic form can be radically redefined.

“It’s a rare literary critic who attracts so much public attention, and there’s a good reason: few are as hell-bent on rethinking the way we talk about literature.”—Times Literary Supplement

“The great iconoclast of literary criticism ... Moretti’s discourse, as has often been noted, is marked by the same subtlety and unpredictability as his fellow Italian, Umberto Eco.”—Guardian

Franco Moretti teaches English and Comparative Literature at Columbia University. He is the author of Signs Taken for Wonders, The Way of the World and Modern Epic, all from Verso.

Alberto Piazza is Professor Human Genetics at the Medical School of Turin University. He is a co-author of the History and Geography of Human Genes.
Loading...
or
Not Currently Available for Direct Purchase