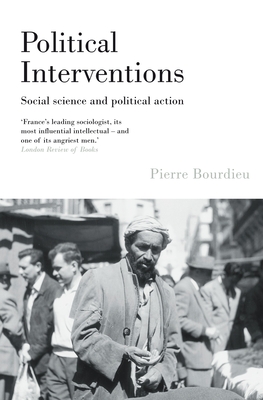 Pierre Bourdieu, one of the most influential critical social theorists of the second half of the twentieth century, once described sociology as “a combat sport.” This comprehensive collection of his writings on politics and social science, from early 1960s articles on the Algerian War of Independence to the last text he published before his death, proves that this vision was enduring throughout his life—as well as a serious scholar Bourdieu was always an outspoken public intellectual.

Political Interventions includes many texts hitherto unavailable in English and, placing them in their historical context, reconstructs Bourdieu’s vision of academic study and political activism as two sides of the same process: the decoding and critique of social reality in order to transform it.

“France’s leading sociologist, its most influential intellectual—and one of its angriest men.”—London Review of Books

“The most convincing embodiment of the politically active intellectual since Jean-Paul Sartre or Michel Foucault.”—The Times

“Pierre Bourdieu ... was, for many, the leading intellectual of present-day France ... a thinker in the same rank as Foucault, Barthes and Lacan.”—Guardian

“Since the 1960s Pierre Bourdieu’s terrific constancy has been there to hold us to the vision and divisions of criticism, detachment, reason, truth.”—Times Higher Education Supplement

“Bourdieu is the rare kind of intellectual author who makes sense outside of the university.”—New Statesman

Pierre Bourdieu (1930–2002) was Professor of Sociology at the Collège de France and Director of Studies at the Ecole des Hautes Etudes en Sciences Sociales. He was the author of many books, most notably Distinction, The Rules of Art, The State Nobility, Homo Academicus, The Logic of Practice, and The Weight of the World.
Loading...
or
Not Currently Available for Direct Purchase