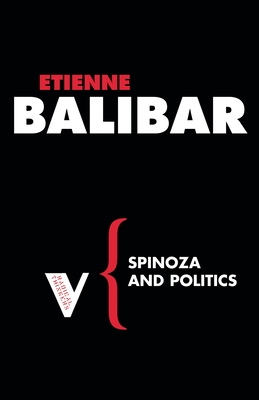 With Hobbes and Locke, Spinoza is arguably one of the most important political philosophers of the modern era, a premier theoretician of democracy and mass politics. In this revised and augmented English translation of his 1985 classic, Spinoza et la Politique, Etienne Balibar presents a synoptic account of Spinoza’s major works, admirably demonstrating relevance to his contemporary political life.

Balibar carefully situates Spinoza’s major treatises in the period in which they were written. In successive chapters, he examines the political situation in the United Provinces during Spinoza’s lifetime, Spinoza’s own religious and ideological associations, the concept of democracy developed in the Theologico-Political Treatise, the theory of the state advanced in the Political Treatise and the anthropological basis for politics established in the Ethics.

Warren Montag is Associate Professor of English at Occidental College, Los Angeles. He is the author of Bodies, Masses, Power: Spinoza and his Contemporaries and the Unthinkable Swift.

“Etienne Balibar was one of the brilliant group of students around Althusser in the early 1960s. Since then he has established himself as one of France’s foremost philosophers on the Left.”—Radical Philosophy
or support indie stores by buying on
Copyright © 2020 American Booksellers Association