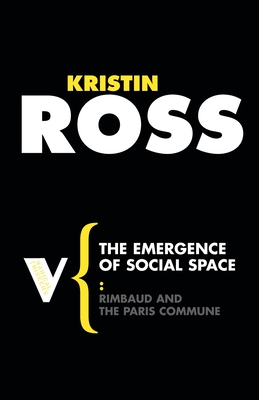 The Emergence of Social Space

The 1870s in France – Rimbaud’s moment, and the subject of this book – is a decade virtually ignored in most standard histories in France. Yet it was the moment of two significant spatial events: France’s expansion on a global scale, and, in the spring of 1871, the brief existence on the Paris Commune – the construction of the revolutionary urban space. Arguing that space, as a social fact, is always political and strategic, Kristin Ross has written a book that is at once a history and geography of the Commune’s anarchist culture – its political language and social relations, its values, strategies, and stances.

Central to her analysis of the Commune as a social space and oppositional culture is a close textual reading of Arthur Rimabaud’s poetry. His poems – a common thread running through the book – are one set of documents among many in Ross’s recreation of the Communard experience. Rimbaud, Paul Lafargue, and the social geographer Élisée Reclus serve as emblematic figures moving within and on the periphery of the Commune; in their resistance to the logic and economy of the capitalist conception of work, in their challenge to work itself as a term of identity, all three posed a threat to the existing order. Ross looks at these and other emancipatory notions as aspects of Communard life, each with an analogous strategy in Rimbaud’s poetry. Applying contemporary theory, to a wealth of little-known archival material, she has written a fresh, persuasive, and original book.

Praise For The Emergence of Social Space: Rimbaud and the Paris Commune (Radical Thinkers)…

“A fascinating cultural history of the Commune.”
—Tariq Ali

“A rare example of cultural studies done with zest as well as depth.”
—New Statesman & Society

Kristin Ross is a professor of comparative literature at New York University. She is the author of numerous books, including Fast Cars, Clean Bodies: Decolonization and the Reordering of French Culture and May ’68 and its Afterlives.

Terry Eagleton is Professor of Cultural Theory and John Rylands Fellow, University of Manchester. His other books include Ideology; The Function of Criticism; Heathcliff and the Great Hunger; Against the Grain; Walter Benjamin; and Criticism and Ideology, all from Verso.
Loading...
or support indie stores by buying on