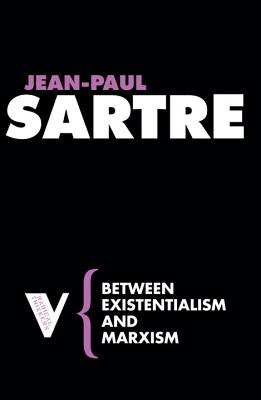 Between Existentialism and Marxism (Paperback)

This book presents a full decade of Sartre’s work, from the publication of the Critique of Dialectical Reason in 1960, the basic philosophical turning-point in his postwar development, to the inception of his major study on Flaubert, the first volumes of which appeared in 1971. The essays and interviews collected here form a vivid panorama of the range and unity of Sartre’s interests, since his deliberate attempt to wed his original existentialism to a rethought Marxism.

A long and brilliant autobiographical interview, given to New Left Review in 1969, constitutes the best single overview of Sartre’s whole intellectual evolution. Three analytic texts on the US war in Vietnam, the Soviet invasion of Czechoslovakia, and the lessons of the May Revolt in France, define his political positions as a revolutionary socialist. Questions of philosophy and aesthetics are explored in essays on Kierkegaard, Mallarme and Tintoretto. Another section of the collection explores Sartre’s critical attitude to orthodox psychoanalysis as a therapy, and is accompanied by rejoinders from colleagues on his journal Les Temps Modernes. The volume concludes with a prolonged reflection on the nature and role of intellectuals and writers in advanced capitalism, and their relationship to the struggles of the exploited and oppressed classes. Between Existentialism and Marxism is an impressive demonstration of the breadth and vitality of Sartre’s thought, and its capacity to respond to political and cultural changes in the contemporary world.

Praise For Between Existentialism and Marxism…