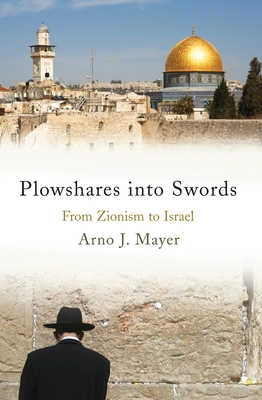 From Zionism to Israel

This rich, authoritative history chronicles the Zionist Israeli quest from itsorigins in pre-Great War Europe. Plowshares Into Swords traces the development of political Zionism's primal resolve to implant a state for Jews in a Middle East of ever greater strategic importance. In it, Mayer provides newperspectives on key turning points as well as on such enduring issues as the young country's dire need for imperial protection, the oil imperative, the hidden ascendance of Jabotinsky's martial and expansionist canon, and reliance on the American Jewish and Christian evangelical lobbies. He examines, too, the post-colonial backlash against Western supremacy, the asymmetry of power between Israelis and Palestinians, the Zionist Israeli leaders studied prevarication on borders, and the emergence of political Judaism and political Islam.

Incorporating reflections on founding violence, sovereignty, resistance, terror, and religious politics, Plowshares into Swords is an absorbing, challenging narrative of Zionism and Israel in the context of world history.

Praise For Plowshares into Swords: From Zionism to Israel…

“In Plowshares into Swords, Arno Mayer gives a sweeping and often illuminating overview of the story of Zionism.”
—Geoffrey Wheatcroft, New Statesman

Arno Mayer is Professor Emeritus of European History at Princeton University. His many books include The Persistence of the Old Regime: Europe to the Great War, The Furies: Violence and Terror in the French and Russian Revolutions, Plowshares into Swords: From Zionism to Israel and Why Did the Heavens Not Darken? The &ldquo;Final Solution&rdquo; in History.
Loading...
or
Not Currently Available for Direct Purchase