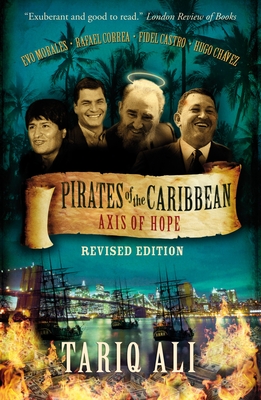 Pirates of the Caribbean

The Bolivarian revolution in Venezuela has brought Hugo Chávez to world attention as the foremost challenger of the neoliberal consensus and American foreign policy. Drawing on first-hand experience of Venezuela and meetings with Chávez, Tariq Ali shows how Chávez’s views have polarized Latin America and examines the hostility directed against his administration. Contrasting the Cuban and Venezuelan revolutionary processes, Ali discusses the enormous influence of Fidel Castro on Chávez, President of Bolivia Evo Morales and, in this fully updated edition, the newly elected President of Ecuador Rafael Correa, the latest addition to the “Axis of Hope.” Infused with references to the culture and poetry of South America, Pirates of the Caribbean guides us through a world divided between privilege and poverty, a continent that is once again on the march.

Praise For Pirates of the Caribbean: Axis of Hope…

“Tariq Ali, the Johnny Depp of international comment, sails out in this little barque ... to assault the top-heavy galleon Washington Consensus, as she labours leaking through the South Seas and the Spanish Main ...”—Spectator

“Exuberant and good to read.”—London Review of Books

Tariq Ali is a writer and filmmaker. He has written more than a dozen books on world history and politics—including Pirates of the Caribbean, Bush in Babylon, The Clash of Fundamentalisms and The Obama Syndrome—as well as five novels in his Islam Quintet series and scripts for the stage and screen. He is an editor of the New Left Review and lives in London.
Loading...
or
Not Currently Available for Direct Purchase