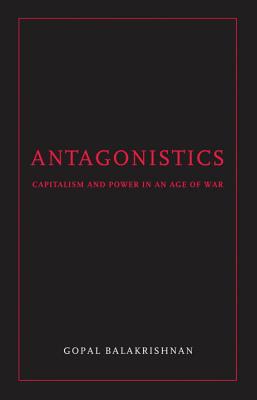 Capitalism and Power in an Age of War

Antagonistics addresses central political and theoretical questions: how should we conceive the relations between neo-imperial warfare and neoliberalism, or American hegemony and capitalist globalization? Reflections on the major issues of the new international order are set within a larger framework, tracing the intertwined evolution of the modern state system and the capitalist mode of production, from the Treaty of Westphalia to the Occupation of Iraq. Gopal Balakrishnan interrogates three key political perspectives—including Tocqueville’s liberalism, Althusser’s Marxism and Schmitt on the radical right—for their insights on state power and civil society, democracy, and class. Antagonistics combines intellectual history, political philosophy, and historical sociology to produce a highly distinctive portrait of an age of capital and war.

Praise For Antagonistics: Capitalism and Power in an Age of War…

“This collection is an intellectual feast and a dazzling commentary on political thinking, contemporary and classical. Here an intelligence honed on Schmitt and Machiavelli reviews a range of theoretical texts with courteous sarcasm and radical interrogation; the results are wityy, devastating and full of suggestive speculation, culminating in the horizon of an astounding new vision of Machiavelli, well beyond the stereotypical discourse of conventional political science or journalistic commentary.”—Fredric Jameson

“Hegel wrote that the moment of triumph of a social movement is simultaneously the moment of its disintegration: when the external enemy disappears, inherent antagonisms explode. Gopal Balakrishnan shows how this holds for the worldwide triumph of liberal democracy in the 1990s—Fukuyama’s dream of the ‘end of history’ has morphed into economic crisis and foreign policy failure. Antagonistics is a book for all those who want to orient themselves in the chaos of our historical moment—which means it is a book for everyone.”—Slavoj Žižek