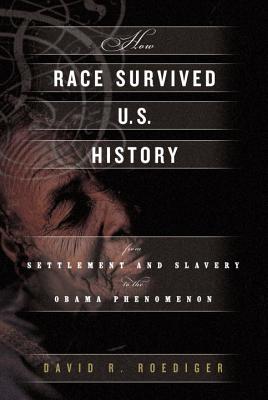 How Race Survived US History (Hardcover)

From Settlement and Slavery to the Obama Phenomenon

In this absorbing chronicle of the role of race in US history, David R. Roediger explores how the idea of race was created and recreated from the 1600’s to the present day. From the late seventeenth century—the era in which DuBois located the emergence of “whiteness”—through the American revolution and the emancipatory Civil War, to the civil rights movement and the emergence of the American empire, How Race Survived US History reveals how race did far more than persist as an exception in a progressive national history. Roediger examines how race intersected all that was dynamic and progressive in US history, from democracy and economic development to migration and globalization.

Exploring the evidence that the USA will become a majority “nonwhite” nation in the next fifty years, this masterful account shows how race remains at the heart of American life in the twenty-first century.

Praise For How Race Survived US History: From Settlement and Slavery to the Obama Phenomenon…

“In a trenchant, broad-ranging analysis, the leading US historian of racism, David Roediger, demonstrates white supremacy’s incredible staying power against major societal forces that should long ago have dismantled it. Not capitalism, not emancipation, not labor movements, not mass immigration, not the civil rights movement, not colorblind liberalism, and not the Barack Obama presidential campaign—not one of these forces separately, and not all of them together—have been able to destroy the deep structures of white racism in the United States.”—Joe R. Feagin

“David Roediger’s bold and brilliant book presents an extraordinary new framework for understanding the persistence of racism in the history of the United States. This book is a wake-up call and a warning, an appeal for understanding and action. It offers a clear and convincing demonstration that white supremacy is not merely a relic of the past but rather a perpetually renewed and infinitely renewable resource for inequality and injustice in the present.”—George Lipsitz

“A staggering re-interpretation of the whole course of American history in which the skeletons in the closet walk again. From genocide and massacre to lynching to the coded tongue of liberalism, the bankruptcy of white supremacy is found in the racialized structures maintained by the enclosures of incarceration and the foreclosures of impignoration. Read it, Obama, and weep!”—Peter Linebaugh

“Sometime in the US of the past quarter-century, calling policies and the people who dream them up racist became a worse offense than for them to be racist. This inversion, always dressed in self-righteous indignation, is actually part of the social evolution of white supremacy. David Roediger’s new book details in sharp and readable prose how race survived US history. It is a must-read for all who strive to understand—and abolish—what underlies the strangely strident rhetoric enveloping everything from presidential contests to prison expansion.”—Ruth Wilson Gilmore