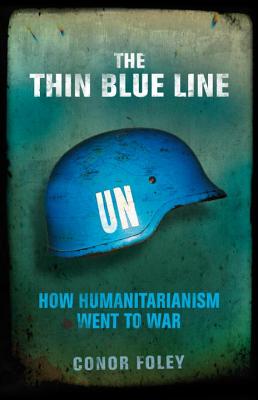 How Humanitarianism Went to War

The idea that we should “do something” to help those suffering in far-off places is the main impulse driving those who care about human rights. Yet from Kosovo to Iraq, military interventions have gone disastrously wrong.

In this groundbreaking new book, Conor Foley explores how the doctrine of humanitarian intervention has been used to allow states to invade other nations in the name of human rights. Drawing on his own experience of working in over a dozen conflict and post-conflict zones, Foley shows how the growing influence of international law has been used to override the sovereignty of the poorest countries in the world.

The Thin Blue Line describes how in the last twenty years humanitarianism has emerged as a multibillion dollar industry that has played a leading role in defining humanitarian crises, and shaping the foreign policy of Western governments and the United Nations. Yet, too often, this has been informed by myths and assumptions that rest on an ill-informed post-imperial arrogance. Movements set up to show solidarity with the powerless and dispossessed have ended up betraying them instead.

Praise For The Thin Blue Line: How Humanitarianism Went to War…

“This is a penetrating analysis of modern humanitarianism. Conor Foley brings all his own experience to bear as he punctures the myths and delusions that have coloured discussion of humanitarian action from Biafra to Kosovo to Iraq, Darfur and Afghanistan. He lays bare the complexities and dilemmas that are rarely examined and argues that the answer to the world’s woes is rarely military intervention. A stunning book!”—Helena Kennedy

“When can massive and systematic violations of human rights within one state justify a foreign intervention? Today, few questions are more pressing. With this vital and necessary book Conor Foley outlines an important agenda for change.”—Philippe Sands

“No one is more qualified than Conor Foley to raise questions about the good and the bad—mostly the bad—of humanitarian intervention. Foley has been there and done it as a humanitarian worker throughout his adult life, and he raises many disquieting questions as he uncovers the failures of even the most well-meant military interventions. Iraq ans Afghanistan loom large in this book, and the American travails there are dispassionately depicted in ways one rarely finds in mainstream media reporting.”—Seymour M. Hersh

“Drawing upon his personal experience from emergency operations across the world and legal scholarship, Conor Foley has written a strikingly original, wide-ranging and insightful critique of humanitarian action and military intervention.”—Alex De Waal

A humanitarian aid worker, Conor Foley has been employed by a variety of human rights and humanitarian organizations, including Liberty, Amnesty International and the UNHCR, in Kosovo, Afghanistan, Colombia, Brazil, Sri Lanka, Indonesia, Liberia, Northern Uganda, the Caucasus and Bosnia-Herzegovina. His books include "Combating Torture."
or
Not Currently Available for Direct Purchase