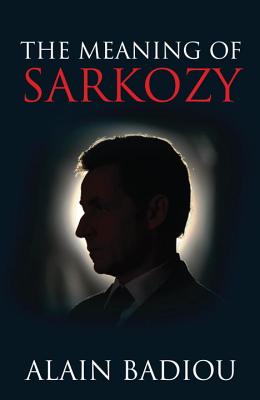 The Meaning of Sarkozy

Alain Badiou, France’s leading radical theorist and commentator, dissects the Sarkozy phenomenon in this sharp, focused intervention. He argues that the election of Nicolas Sarkozy as President does not necessarily signal a crucial turning point in French politics, nor require a further rightward move from competing electoral forces.

To understand the significance of Sarkozy, we have to look beyond the right-wing populism and vulgarity of the man himself, and ask what he represents: a reactionary tradition that goes back to the early nineteenth century, a tradition based on fear.

Badiou argues that to escape from the atmosphere of depression and anxiety that currently envelops the Left, we need to cast aside the slavish worship of electoral democracy. In a characteristically doughty and wide-ranging conclusion, Alain Badioun maps out a ‘communist hypothesis’ that can lay the basis for a genuine emancipatory politics in the twenty-first century.

Praise For The Meaning of Sarkozy…

Alain Badiou teaches philosophy at the E?cole normale superieure and the College international de philosophie in Paris. In addition to several novels, plays and political essays, he has published a number of major philosophical works, including "Theory of the Subject," "Being and Event," "Manifesto for Philosophy," and "Gilles Deleuze." His recent books include "The Meaning of Sarkozy," "Ethics," "Metapolitics," "Polemics, ""The Communist Hypothesis," "Five Lessons on Wagner," and "Wittgenstein's Anti-Philosophy."
Loading...
or
Not Currently Available for Direct Purchase