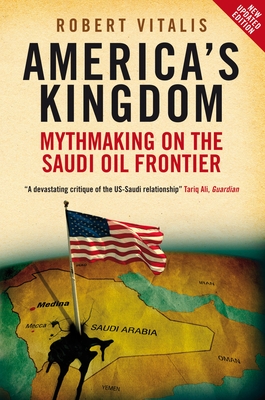 Mythmaking on the Saudi Oil Frontier

Now newly updated, America’s Kingdom debunks the many myths that now surround the United States’s special relationship with Saudi Arabia, also known as “the deal”: oil for security. Exploding the long-established myth that the Arabian American Oil Company, Aramco, made miracles happen in the desert, Robert Vitalis shows how oil led the US government to follow the company to the kingdom, and how oil and Aramco quickly became America’s largest single overseas private enterprise. From the establishment in the 1930s of a Jim Crow system in the Dhahran oil camps, to the consolidation of America’s Kingdom under the House of Fahd, the royal faction that still rules today, this is a meticulously researched account of Aramco as a microcosm of the colonial order.

Praise For America's Kingdom: Mythmaking on the Saudi Oil Frontier…

“A devastating critique of the US-Saudi relationship.”—Tariq Ali, Guardian

“A scholarly and readable book on the interaction between Saudi society and Aramco, the US oil giant that had its beginnings when the Saudi government granted its first concessions to Standard Oil of California in 1933. Combining history with political geography, Vitalis sheds a bright light on the origins and less savory aspects of the Saudi-US relationship.”—London Review of Books

“Groundbreaking is a word too often used in assessing historical scholarship. Yet its application to Robert Vitalis’s book is nothing less than a necessity. The result of painstaking research in not only heretofore unused but previously unknown records, the book makes a major contribution to a variety of fields: international history, US-Saudi relations, business history, American race history, and more ... Those seeking to explain the present US place in the world should consider it essential reading.”—American Historical Review

Robert Vitalis is Associate Professor of Political Science at the University of Pennsylvania. He is author of When Capitalists Collide: Business Conflict and the End of Empire in Egypt and co-editor of Counter-Narratives: History, Contemporary Society, and Politics in Saudi Arabia and Yemen.
Loading...
or support indie stores by buying on
(This book is on backorder)