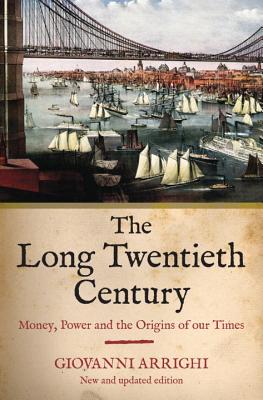 Money, Power and the Origins of Our Time

The Long Twentieth Century traces the epochal shifts in the relationship between capital accumulation and state formation over a 700-year period. Giovanni Arrighi masterfully synthesizes social theory, comparative history and historical narrative in this account of the structures and agencies which have shaped the course of world history over the millennium.

Borrowing from Braudel, Arrighi argues that the history of capitalism has unfolded as a succession of “long centuries”—ages during which a hegemonic power deploying a novel combination of economic and political networks secured control over an expanding world-economic space. The modest beginnings, rise and violent unraveling of the links forged between capital, state power, and geopolitics by hegemonic classes and states are explored with dramatic intensity. From this perspective, Arrighi explains the changing fortunes of Florentine, Venetian, Genoese, Dutch, English, and finally American capitalism. The book concludes with an examination of the forces which have shaped and are now poised to undermine America’s world power.

Praise For The Long Twentieth Century: Money, Power and the Origins of Our Time…

“A vivid, fact-filled exposé of the cyclical monetary forces that surge through human society.”—Observer Review

Giovanni Arrighi (1937-2009) was Professor of Sociology at Johns Hopkins University. His books include "The Long Twentieth Century," "Adam Smith in Beijing," and, with Beverly Silver, "Chaos and Governance in the Modern World System." His work has appeared in many publications, including "New Left Review"--who published an interview on his life-long intellectual trajectory in March-April 2009, and an obituary in Nov-Dec 2009--and there are more accounts on his memorial website.
Loading...
or
Not Currently Available for Direct Purchase