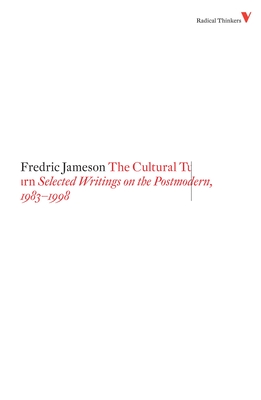 Fredric Jameson, a leading voice on the subject of postmodernism, assembles his most powerful writings on the culture of late capitalism in this essential volume. Classic insights on pastiche, nostalgia, and architecture stand alongside essays on the status of history, theory, Marxism, and the subject in an age propelled by finance capital and endless spectacle. Surveying the debates that blazed up around his earlier essays, Jameson responds to critics and maps out the theoretical positions of postmodernism’s prominent friends and foes.

Praise For The Cultural Turn: Selected Writings on the Postmodern, 1983-1998 (Radical Thinkers)…

“Probably the most important cultural critic writing in English today ... It can be truly said that nothing cultural is alien to him.”—Colin MacCabe

“Exploding like so many magnesium flares in the night sky, Fredric Jameson’s writings have lit up the shrouded landscape of the postmodern ... The Cultural Turn offers the most compact and complete résumé on the subject.”—Perry Anderson

Fredric Jameson is Distinguished Professor of Comparative Literature at Duke University. The author of numerous books, he has over the last three decades developed a richly nuanced vision of Western culture’s relation to political economy. He was a recipient of the 2008 Holberg International Memorial Prize. He is the author of many books, including Postmodernism, Or, The Cultural Logic of Late Capitalism, The Cultural Turn, A Singular Modernity, The Modernist Papers, Archaeologies of the Future, Brecht and Method, Ideologies of Theory, Valences of the Dialectic, The Hegel Variations and Representing Capital.
Loading...
or
Not Currently Available for Direct Purchase