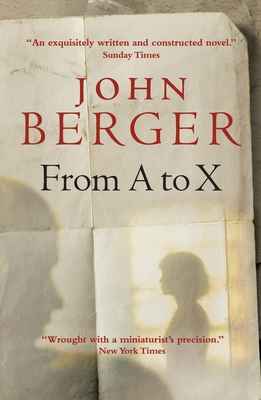 From A to X

A Story in Letters

In the dusty, ramshackle town of Suse lives A’ida. Her insurgent husband Xavier has been imprisoned. Resolute, sensuous and tender, A’ida’s letters to the man she loves tell of daily events in the town, and of its motley collection of inhabitants whose lives flow through hers. But the town is under threat, and as a faceless power inexorably encroaches from outside, so the smallest details and acts of humanity assume for A’ida a life-affirming significance, acts of resistance against the forces that might otherwise extinguish them.

Praise For From A to X: A Story in Letters…

“John Berger has given us an exquisite thing. This is a book of controlled rage sculpted with tools of tenderness and a searing political vision.”—Arundhati Roy

“From A to X is one of the most tender and poignant books I have read for many years. Its power rests in its economy of means, its account of enduring love surviving oppression. It demonstrates that however foul the forces oppressing us, love and the human spirit are indestructible.”—Harold Pinter

“The record of one restless, committed, brilliant consciousness; a late showcase of astonishing range and depth, which should be read as an epic poem or lyrical essay as much as a novel.”—Melissa Benn, Independent

Storyteller, novelist, essayist, screenwriter, dramatist and critic, John Berger is one of the most internationally influential writers of the last fifty years. His many books include Ways of Seeing, the fiction trilogy Into Their Labours, Here Is Where We Meet, the Booker Prize-winning novel G, Hold Everything Dear, the Man Booker–longlisted From A to X, and A Seventh Man.
Loading...
or
Not Currently Available for Direct Purchase