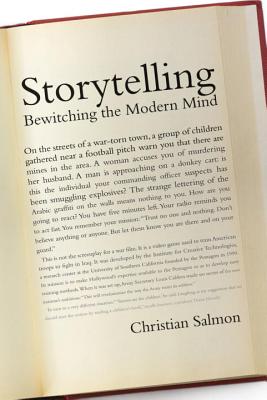 Politics, as currently practiced, is no longer the art of the possible, but the art of the fictive. Its aim is not to change the world as it exists, but to affect the way it is perceived.

This is the subject of Christian Salmon&rsquo;s Storytelling, which looks at how the creative imagination has been hijacked in the twenty-first century. Salmon anatomizes the timeless human desire for narrative form and how it is abused in the marketing mechanisms behind politicians and products: luxury brands trade on their embellished histories, managers tell stories to motivate employees, soldiers in Iraq train on computer games conceived in Hollywood, and spin doctors construct political lives as if they were a folk epic.

Salmon unveils the workings of a &ldquo;storytelling machine&rdquo; more effective and insidious as a means of oppression than anything dreamed up by Orwell. The &ldquo;reality-based community&rdquo;—to use a phrase coined by an aide to George W. Bush—is now regularly outmaneuvered by public relations gurus and political advisers, as they construct story arcs for a population that has come to expect them.

“French writer Salmon here treats us to the useful spectacle of a relentless polemic against a ubiquitous idea widely held to provoke only positive feelings. As used by branders or politicians, ‘storytelling’ is, on his argument, a sedative, suppressing the desire for truth in favour of satisfying narrative form.”
—Guardian

“Fascinating … intellectually satisfying … Salmon’s insights are though-provoking and have ramifications beyond the world of advertising.”
—James P. Othmer, Washington Post

“Salmon draws together his arguments into a coherent and chilling whole.”
—Independent

“Salmon makes a riveting case for how public relations (or more euphemistically, storytelling) has come to dominate statecraft and business in the West.”
—Publishers Weekly

“This book, which is both concise and clearly written … guides us through these texts which are largely unknown and now very influential.”
—Le Monde

“There are certain books that make you feel less stupid after reading them than before … It is a fascinating and never jargon-heavy book.”
—Le Progrès

Christian Salmon is a writer and researcher in the Centre for Research in the Arts and Language at the CNRS in Paris. He is the founder of the International Parliament of Writers, of which he was president from 1993 to 2003, and is the author of several works, including Tombeau de la fiction, Devenir minoritaire, Verbicide and Storytelling. He writes a regular column for Le Monde.
Loading...
or
Not Currently Available for Direct Purchase