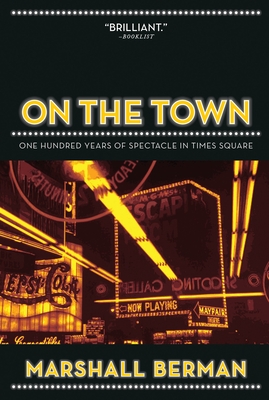 One Hundred Years of Spectacle in Times Square

Described as ‘a continuous carnival’ and ‘the crossroads of the world,’ Times Square is a singular phenomenon: the spot where imagination and veracity intersect. To Marshall Berman, it is also the flashing, teeming, and strangely beautiful nexus of his life. In this remarkable book, Berman takes us on a thrilling illustrated tour of Times Square, revealing a landscape both mythic and real. Interleafing his own recollections with social commentary, he reveals how movies, graphic arts, literature, popular music, television, and, of course, the Broadway theater have reflected Times Square’s voluminous light to illuminate a vast spectrum of themes and vignettes. Part love letter, part revelatory semiotic exposition of a place known to all, On the Town is a nonstop excursion to the heart of American civilization, written by one of our keenest, most entertaining cultural observers.

Praise For On the Town: One Hundred Years of Spectacle in Times Square…

“Like the square itself, the choreographer of this neon Leaves of Grass is a hybrid of styles and genres, of page, stage, screen, and jazz. He is up in the air, like Ruby Keeler on top of a taxi. He is dancing in the street, with Martha and the Vandellas. A Pied Piper, Johnny Appleseed, and Sergeant Pepper, he leads us into movie houses, libraries, juke joints, temptation, and transcendence ... the fact is, I can no longer see Times Square on my own. I am looking at some splendid magical-realist Macondo from inside the head of a man with kaleidoscope eyes.”—John Leonard, New York Magazine