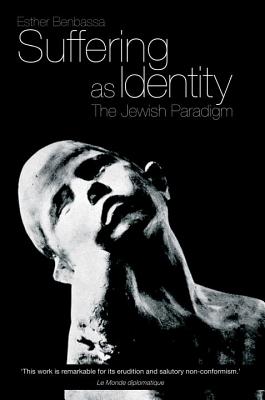 Reaching from biblical times to the present day, Esther Benbassa's prize-winning exploration of Jewish identity is both epic and comprehensive. She shows how in the Jewish world the representation and ritualization of suffering has shaped the history of both the people and the religion. Benbassa argues that the nineteenth century gave rise to a Jewish lachrymose historiography, and that Jewish history was increasingly seen to be a valley of tears a development that has become even more dominant since the Holocaust. The treatment of the Holocaust in the State of Israel now has the form of a civil religion. In principle within reach of everyone, the duty of memory and the uniqueness of the genocide have mitigated for many Jews the loss of other traditions. Every time Israel perceives a threat to its existence, the memory of the Holocaust is invoked which ensures that suffering continues to be a central part of Jewish identity, and also positions the State of Israel as a redemptive force.

Praise For Suffering as Identity: The Jewish Paradigm…

“A magnificent plea for a Judaism of the future which would no longer have—or no longer solely have—'suffering as identity' and Israeli politics as its instruments of redemption.”—Politis

“The triumph of mourning, Esther Benbassa warns us, stifles the breath of life. How can we fail to agree?”—Regis Debray, Le Nouvel Observateur

“This work is remarkable for its erudition and salutory non-conformism.”—Le Monde diplomatique

Esther Benbassa is Chair in the History of Modern Judaism at the Ecole Pratique des Hautes Etudes in Paris. She is the author of many books, including "The Jews of the Balkans," "The Judeo-Spanish Community, 15th to 20th Centuries," "History of Sephardic Jewry, XIVth-XXth Centuries," "The Jews of France," "A History from Antiquity to the Present," "The Jew and the Other," and "Suffering as Identity."
Loading...
or
Not Currently Available for Direct Purchase