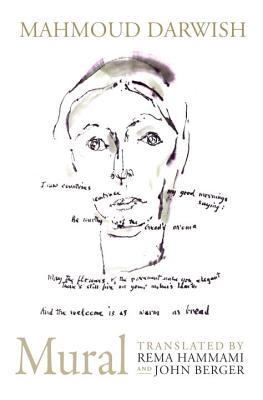 Mahmoud Darwish was the Palestinian national poet. One of the greatest poets of the last half century, his work evokes the loss of his homeland and is suffused with the pain of dispossession and exile. His poems display a brilliant acuity, a passion for and openness to the world and, above all, a deep and abiding humanity. Here, his close friends John Berger and Rema Hammami present a beautiful new translation of two of Darwish’s later works. Illustrated with original drawings by John Berger, Mural is a testimony to one of the most important and powerful poets of our age.

“Darwish’s poetry is an epic effort to transform the lyrics of loss into the indefinitely postponed drama of return.”
—Edward Said

“Did as much as anyone to forge a Palestinian national consciousness.”
—Peter Clark, Guardian

“The most celebrated writer of verse in the Arab world.”
—Adam Shatz, New York Times

“His was a constant voice calling for coexistence between Israelis and Palestinians.”
—Times of London

Mahmoud Darwish (1942–2008) published some thirty books of poetry and prose and has been translated into thirty-five languages. His many international awards include the Lenin Peace Prize and the Lannan Foundation Prize for Cultural Freedom.

Rema Hammami is professor at the Institute for Women’s Studies at Birzeit University, Ramallah.
Loading...
or
Not Currently Available for Direct Purchase