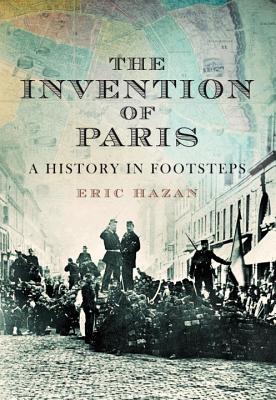 The Invention of Paris

A History Told in Footsteps

The Invention of Paris is a tour through the streets and history of the French capital under the guidance of radical Parisian author and publisher Eric Hazan.

Hazan reveals a city whose squares echo with the riots, rebellions and revolutions of the nineteenth and twentieth centuries. Combining the raconteur’s ear for a story with a historian’s command of the facts, he introduces an incomparable cast of characters: the literati, the philosophers and the artists—Balzac, Baudelaire, Blanqui, Flaubert, Hugo, Maney, and Proust, of course; but also Doisneau, Nerval and Rousseau.

It is a Paris dyed a deep red in its convictions. It is haunted and vitalized by the history of the barricades, which Hazan retells in rich detail. The Invention of Paris opens a window on the forgotten byways of the capital’s vibrant and bloody past, revealing the city in striking new colors.

Praise For The Invention of Paris: A History Told in Footsteps…

“Hazan has tossed aside the tourist brochures and unearthed a radical, hidden history of Paris at street level. Hazan’s range of cultural, literary and historical references is convincingly detailed; his grasp of radical politics is intellectually stimulating; and his revelations about how ordinary French lives dealt with tough conditions bring resonance to the “spirit of place and the spirit of time” in which complex urban issues rise and fall.”—Times

“A wondrous book, either to be read at home with a decent map, or carried about sur place through areas no tourists bother with.”—Adam Thorpe, Guardian

“The Invention of Paris is one of the greatest books about the city anyone has written in decades, towering over a crowded field, passionate and lyrical and sweeping and immediate.”—Luc Sante, New York Review of Books

“Hazan wants to rescue individual moments from general forgetting and key sites from the bland homogenisation of international city development; he is also a passionate left-wing historian seeking to rescue the truth of Paris’s revolutionary past from the historiographical equivalent of Haussmannisation—the blasting through and laying waste to the lives and memories of the unimportant, the marginalised, the losers of the last two centuries.”—Julian Barnes, London Review of Books

“Few will be able to resist ... Hazan’s brick-by-brick account of the city’s history of strife and political posturing is riveting.”—Publishers Weekly

“[Hazan] stalks the capital, fulminating about the nineteenth and twentieth centuries’ artistic and political rebellions.”—Bookforum

“Do you want to be happy? Buy this book and take a stroll.”—Les Inrockuptibles

“Not just a history book, but a guide to what makes Paris the melting pot it is today ... A wholly worthwhile read.”—French magazine

Eric Hazan is the founder of the publisher La Fabrique and the author of several books, including "Notes on the Occupation" and the highly acclaimed "The Invention of Paris." He has lived in Paris, France, all his life.
Loading...
or
Not Currently Available for Direct Purchase