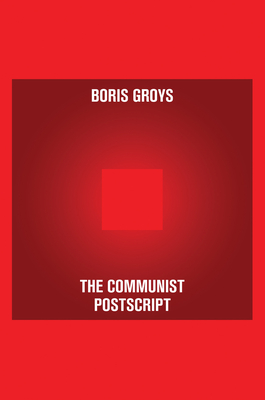 Since Plato, philosophers have dreamed of establishing a rational state ruled through the power of language. In this radical and disturbing account of Soviet philosophy, Boris Groys argues that communism shares that dream and is best understood as an attempt to replace financial with linguistic bonds as the cement uniting society. The transformative power of language, the medium of equality, is the key to any new communist revolution.

“One of the most astute commentators on the art scene today.”—New Left Review

“A timely intervention in present debates about the legacy of communism [and] a provocative addition to Groys’ brilliantly paradoxical body of work.”—Art Review

“Groys has claimed a defining role in the reception of the Russian avant-garde ... The Communist Postscript presents Groys’s attempt to advocate the communist idea against its own historic assumptions.”—Radical Philosophy

Boris Groys is Professor in the Faculty of Arts and Science, NYU. He has published numerous books, including On the New, Introduction to Antiphilosophy, The Total Art of Stalinism, and The Communist Postscript.