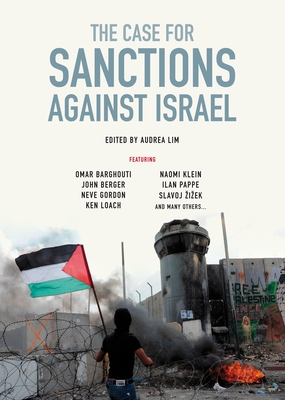 The Case for Sanctions Against Israel

In July 2011, Israel passed legislation outlawing the public support of boycott activities against the state, corporations, and settlements, adding a crackdown on free speech to its continuing blockade of Gaza and the expansion of illegal settlements. Nonetheless, the campaign for boycott, divestment, and sanctions (BDS) continues to grow in strength within Israel and Palestine, as well as in Europe and the US.

This essential intervention considers all sides of the movement—including detailed comparisons with the South African experience—and contains contributions from both sides of the separation wall, along with a stellar list of international commentators.

Praise For The Case for Sanctions Against Israel…

“Provides clear arguments for international sanctions against Israel because of its treatment of the Palestinians. This excellent collection of essays is an essential text for anyone interested in why they should support the movement to boycott Israel. The essays are not just good reading; they are also an eloquent call to the world to give a damn.”—Ron Jacobs, Counterpunch

“Punish[es] .. Israel with regards to its policies towards Palestinians.”—Book News

Omar Barghouti is a human rights activist, founding member of the Palestinian Campaign for the Academic and Cultural Boycott of Israel and the BDS movement, and author of Boycott, Divestment, Sanctions: The Global Struggle for Palestinian Rights.

Ilan Pappe is Professor of History at the University of Exeter. His many books include The Ethnic Cleansing of Palestine and, most recently, Gaza in Crisis (with Noam Chomsky). He writes for, among others, the Guardian and the London Review of Books.

Ra’anan Alexandrowicz is an Israeli filmmaker and activist.

Hind Awwad is a coordinator with the Palestinian BDS National Committee.

Dalit Baum and Merav Amir are project coordinators of Who Profits from the Occupation? in the Coalition of Women for Peace.

Storyteller, novelist, essayist, screenwriter, dramatist and critic, John Berger is one of the most internationally influential writers of the last fifty years. His many books include Ways of Seeing, the fiction trilogy Into Their Labours, Here Is Where We Meet, the Booker Prize-winning novel G, Hold Everything Dear, the Man Booker–longlisted From A to X, and A Seventh Man.

Angela Davis is a teacher, writer, scholar, and activist/organizer.

Nada Elia teaches Global and Gender Studies at Antioch University in Seattle. She is a member of the Organizing Collective of USACBI, the US Campaign for Academic and Cultural Boycott of Israel.

Neve Gordon is an Israeli academic and the author of Israel’s Occupation.

Ran Greenstein works at the University of the Witwatersrand, Johannesburg, South Africa.

Ronnie Kasrils is a former South African government minister and was an activist during the anti-apartheid struggle. Among other positions, he was chief of military intelligence of the ANC’s military wing. Today he writes and lectures, is active in the Palestinian solidarity movement, and is a noted author whose recent book The Unlikely Secret Agent won the country’s prestigious Alan Paton Award.

Mark LeVine is a Professor of Middle East History at the University of California, Irvine, and author of Heavy Metal Islam: Rock, Resistance, and the Struggle for the Soul of Islam and Impossible Peace: Israel/Palestine Since 1989.

David Lloyd is a Professor of English and Comparative Literature at the University of Southern California.

Ken Loach is the director of The Wind That Shakes the Barley and Looking for Eric. Rebecca O’Brien and Paul Laverty were the producer and writer, respectively, for the latter film.

Haneen Maikey is cofounder and Director of al-Qaws for Sexual and Gender Diversity in Palestinian Society, and cofounder of Palestinian Queers for Boycott, Divestment and Sanctions.

Jonathan Pollak is an Israeli activist who has been involved in the Palestinian popular struggle since 2002.

Laura Pulido is a Professor of American Studies and Ethnicity at the University of Southern California.

Lisa Taraki is a Sociologist at Birzeit University in the occupied Palestinian territories, and a founding member of the Palestinian Campaign for the Academic and Cultural Boycott of Israel.

Rebecca Vilkomerson is the Executive Director of Jewish Voice for Peace.

Michael Warschawski is a journalist, political analyst, and veteran Israeli anticolonial activist. He is also the cofounder of the Alternative Information Center.

Audrea Lim is an associate editor at Verso Books.
Loading...
or
Not Currently Available for Direct Purchase