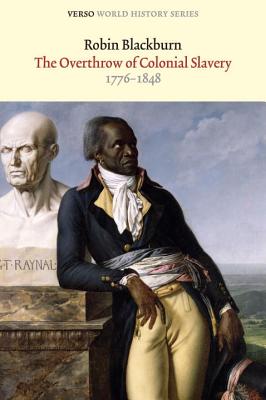 The Overthrow of Colonial Slavery

This series provides attractive new editions of classic works of history, making landmark texts available to a new generation of readers. Covering a timespan stretching from Ancient Greece and Rome to the twentieth century, and with a global geographical range, the series will also include thematic volumes providing insights into such topics as the spread of print cultures and the history of money.

Praise For The Overthrow of Colonial Slavery: 1776-1848 (Verso World History)…

“One of the finest studies of slavery and abolition to appear in many years.”—Eric Foner, Dissident

“The first historian since Eric Williams to present a comprehensive interpretation. But Blackburn, profiting from and admirably synthesizing the vast scholarship produced since Capitalism and Slavery (1944), is far less rigid and doctrinaire, much more attuned to the workings of politics. Unlike Williams, he includes slavery throughout the Western hemisphere.”—David Brion Davis, New York Review of Books

“A challenge to those who fondly suppose that slavery declined as ideas of Western ‘enlightenment’ spread ... Blackburn deserves praise for undermining complacency about the past—and the present.”—Christopher Hitchens, New York Newsday

“Blackburn’s highly intelligent and well-written book is a substantial contribution. In this story the central event is the French Revolution.”—Victor Kiernen, London Review of Books

“An incisive synthesis of developments in North America, the Caribbean and Latin America. Blackburn’s book is bold and original.”—Richard Dunn, Times Literary Supplement

Robin Blackburn teaches at the New School in New York and the University of Essex in the UK. He is the author of many books, including "The Making of New World Slavery," "The Overthrow of Colonial Slavery," "Age Shock," "Banking on Death," and "The American Crucible."
Loading...
or support indie stores by buying on