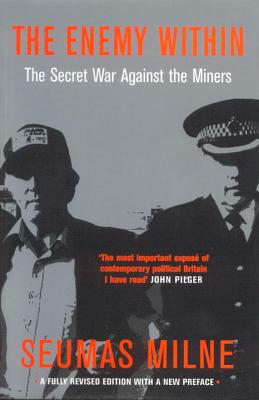 The Secret War Against the Miners

Margaret Thatcher branded the leaders of the 1984-85 miners strike “the enemy within.” With the publication of this book, the full irony of that accusation became clear. Seumas Milne revealed for the first time the astonishing lengths to which the government and its intelligence machine were prepared to go to destroy the power of Britain’s miners’ union. There was an enemy within. It was the secret services of the British state, operating inside the NUM itself.

Milne revealed for the first time the astonishing lengths to which the government and its intelligence machine were prepared to go to destroy the power of Britain’s miners’ union. Using phoney bank deposits, staged cash drops, forged documents, agents provocateurs and unrelenting surveillance, M15 and police Special Branch set out to discredit Scargill and other miners’ leaders. Planted tales of corruption were seized on by the media and both Tory and Labour politicians in what became an unprecedentedly savage smear campaign.

In this new edition, published for the twentieth anniversary of Britain’s most important postwar social confrontation, new material brings the story up to date  – and, in the wake of the Iraq war intelligence scandals, highlights the continuing threat posed by the security services to democracy today.

Praise For The Enemy Within: The Secret War Against the Miners…

Seumas Milne is a columnist and Associate Editor on the "Guardian" and the paper's former Comment Editor. He was previously the "Guardian"'s Labour Editor and a staff journalist on the Economist. He is the author of "The Enemy Within" and co-author of "Beyond the Casino Economy."
Loading...
or
Not Currently Available for Direct Purchase